Two years in property, and Adam’s just booked $5.4m profit on a single deal! How Adam Smith took charge of his life.

Fifteen years in the finance industry had given him nothing.

When Adam and Alison moved back to Australia from the UK, they had to start from scratch. Adam’s financial career had not left him with any contacts in Australian banks, and Alison was giving up her income to care for their new baby at home.

Adam had no experience with property, but in mid-2013 he attended a Dymphna boot camp as well as one of Robert Kiyosaki’s Rich Dad life coaching events. Both opened his eyes to the possibility of financial freedom, but first came the hard work.

Between his career and studying the ‘mountains’ of material in Dymphna’s program, Adam found himself working until seven o’clock every evening and then staying up half the night with the baby, only to head out the house again at six in the morning.

Clear, specific goals and support from his family gave Adam the strength he needed to keep going. His dedication has since paid off, landing one big development deal that has generated a net profit of over $5.4 million and passive income of over $100,000.

Adam set himself a goal: financial independence in three years.

He spent a few months losing sleep and spending all of his free time sourcing property. By the beginning of 2014, the Smiths had completed two property deals.

Next, he purchased a four-bedroom, two-bathroom house in Morayfield, Brisbane for $340K and rented it just to break even.

To Adam, it felt like he was spinning his wheels. Months of work and sleepless nights, and all he had to show for it was a pile of debt and a trickle of cashflow. He felt unfulfilled and discouraged. It was time to review his position and find new inspiration.

In order for Adam to get unstuck, he had to learn to ask himself the right questions. He realised that he had set himself mental limits, and he needed a change in perspective to break them down. He says that he’s learnt to replace ‘I can’t do this’, with ‘how can I do this?”

When Dymphna asked him, “Why do you do property?” He surprised himself with his answer: “I’m just sick of being average.” That was when he realised what he needed to do: think big.

Instead of the generic goal of “financial freedom,” Dymphna encouraged Adam to set specific numbers and dates so that his progress would be measurable. He then wrote up a business plan. Writing down his objectives forced Adam to make them clear and specific. This in turn allowed him to communicate his vision to an experienced developer, and thus a firm and profitable partnership was born.

With Adam sourcing opportunities and his partner providing development expertise, Integral Investments was founded. They looked at nearly 200 sites around Sydney, Brisbane and Melbourne and eventually settled on two blocks totalling 68,000m2 in Logan Reserve.

“I knew I needed to study hard but we had just had a baby. I needed the support of my wife and family to get through those sleepless nights.”

The price of the land was $5.2 million, with a 5% deposit up front and a settlement term of 10 months. Adam and his new company didn’t have that much cash on hand, but they went ahead with the deposit anyway and then set off to find equity partners. They needed $1.5 to $2 million in cash to complete the purchase and $13M in financing for the development.

Unfortunately, Adam’s lack of development experience made his proposition too risky for equity firms to consider. He received dozens of rejections, but every meeting taught him how to sell his ideas better.

The eventual break came from an unexpected direction. A director of Westpac told Adam that his bank wouldn’t back the development, but he liked the deal so much that he would put up his own money. With the new equity partner on board, the deal was funded.

It didn’t take very long for the Logan Reserve development to pay off. The developers subdivided the land and began a staged release of lots for sale. Stage One, with 28 lots, sold out in a matter of days. Stage Two was released recently and is already 70% sold.

When all four stages of the project are completed and sold and the equity partner and lender are paid off, Adam and his partner will be left with $5.4M in profits from the development.

But even with $5m in the bank, it won’t guarantee Adam the positive cashflow he’s looking for, and if he books all of his profits, he’ll be liable for a huge chunk of tax. So Adam’s strategy is to use his share of the profit to buy four lots in the development at wholesale and build on them. He will then rent the new houses for a total of over $100K in passive income and leverage their equity of $1M to take forward to his next development deal.

Adam hasn’t quit his day job just yet, but he’s well on his way. They have made one major lifestyle change though: moving out of their Sydney apartment and purchasing a new home at Avalon Beach – a new home to welcome a second child. Meanwhile, Adam is starting on his next major development in Rochedale.

Adam attributes his success to having a clear purpose and always being able to answer the question, “Why?”.

As for the rest. Work with honesty and integrity. Choose your partners wisely. Build the right team, both personally and professionally. Push through your mental limits. Expect the unexpected. Think big. Don’t be afraid to ask questions, especially stupid questions.

This is the attitude that has got Adam and Alison to where they are today. 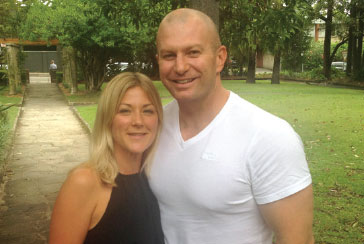 “Everyone needs to determine what is their ‘why.’ The ‘what’, the ‘how’, and the ‘when’ are generally easy questions to ask, but the ‘why’ is the thing that gets you up every morning and makes you want to keep doing what you’re doing.”