They lost nearly everything when the GFC hit… But they rebuilt their dream life with ILRE education.

Jonathan met Jennifer at a party 35 years ago. He went home and told his house mate: ‘I’ve just met the girl I am going to marry’.

Over time, with persistence, he won her heart. Since then, they got married, had a family and climbed the corporate ladder together.

Things were going well as they worked as a team to build a solid future for their family. But sometimes even the best laid plans don’t always work out.

For example, in the year 2000, Jonathan was made redundant.

But, throughout it all, their attitude has been positive and ‘can do’.

“We’ve never been afraid of taking risks, seizing opportunities and trying new things. We work hard and always have done.”

And, they’ve had some rewarding experiences in property too. “Over the years we’ve renovated several times before finally building our own home. It wasn’t quite our dream home, but it was the embodiment in bricks and mortar of everything we’d worked hard for,” said Jonathan.

It was a good, solid family home – with a garden for Jennifer to tend to and a shed at the bottom of the garden for Jonathan to tinker in.

But in 2007, after being made redundant for a second time, things took a turn for the worse for the family.

“Sick of losing my job due to circumstances outside of my control, Jenn and I decided that I would buy a business.

We were so excited about the possibilities that laid ahead and I had done endless due diligence to make sure it was a sound business,” explains Jonathan.

“But again, we were hit by things outside of our control… It turns out I bought the business five minutes before the GFC hit Australia!” said Jonathan.

They pulled on all of their resources and still managed to turn a profit with the business, with Jonathan restructuring things to ensure they didn’t go under.

“But the problem was, I had taken out a second mortgage on our family home to buy the business, and try as I might, I couldn’t make enough profit to cover the loan repayments” says Jonathan.

It was then that the Sanders had to make one of the hardest decisions of their life. “Four years ago with much emotion and tears, we gritted our teeth and sold our beloved family home,” Jennifer explains.

“We knew it was only a matter of time before the banks would force us to sell and so we thought it would be better for us to be in control of the situation.”

All that they had built over the past 30 years practically disappeared overnight.

“Everything we had worked so hard for – gone. Just like that! We went from having our beautiful home with a garden for Jenn and a shed for me to muck about in, to… Nothing!” said Jonathan.

With Jennifer and Jonathan now in their late fifties, this was not what they had envisioned for themselves. “We were left thinking, no home, no prospects, no future… What next?!’ asked Jenn. The Sanders moved into a rented town house with no garden (and no shed!) and had to begin again.
They did have some equity, but their serviceability was low and time was running short before they hoped to retire.

“After some discussions, we thought of real estate as a way forward… Because it had been kind to us in the past.

We’d had some small success with real estate and renovations and we felt we knew enough about it to have a go at something,” said Jonathan.

“But we were also a little hesitant… The sale of our home had left us with a little bit of cash but we knew we couldn’t afford to get it wrong.”

It was around this time that friends gave Jonathan and Jennifer a book by Dymphna Boholt. From there everything changed.

“After reading the book, our friends suggested we go along to one of Dymphna’s one day events. She was like a breath of fresh air! Dymphna told us we could find positive cash flow investments in our own state…And she even showed us how we could create wealth in property… Without using our own money. Hallelujah!” said Jonathan.

“At the end of 2013 we got accepted into Dymphna’s Platinum program – a truly life changing event for us,” explains Jenn.

“In the beginning, we had a one-on-one session with Dymphna where she gave us some suggestions on where to look for a deal,” said Jonathan.

“Jenn is a gun when it comes to searching for deals and in less than 3 months after joining the Platinum program, we had bought a property in Toowoomba.

We had no sooner settled when we were made an offer we couldn’t refuse. We sold the property and netted ourselves a 45k profit before tax,” said Jonathan.

Then, in mid-2016, they made a life changing decision.

“It was mid-2016 and after looking for a job for 6 months without success, Jenn and I went on a retreat with the I Love Real Estate community to Bali.”

“While in Bali, we decided that I would pursue property full time, and Jenn would keep working until I could get her out of it. Somewhere during that retreat, Jenn wrote a goal that we’d have no mortgage on our own home by September 2017.”

“After that retreat, we hit the ground running. We found deals, put them out to the I Love Real Estate Community to find people who might be interested in Joint Ventures. Our JV partners have money, serviceability but no time. We have not a lot of money, no serviceability but loads of time! So, it works really well,” said Jonathan.

Here’s one ‘work in progress’ JV deal they are doing in a bayside suburb of Melbourne.

However, if they choose to build it themselves, they could potentially make a profit of $400,000 to share with their partners. They’ll keep us posted on what they end up doing!

The biggest lesson they’ve learnt from this deal so far is that finding a JV partner and JV deal take time.

But it’s worth it, because it can allow you to do deals, when you were previously stuck.

Although some of Dymphna’s psychology of wealth secrets may be described by some as a little out there, there’s no denying they worked for Jennifer and Jonathan.

“We have our vision boards and white boards where we write our goals… Remember the goal we wrote down in Bali to own our own home? We had no idea how this would happen… But it did. In August, my mum said she wanted to do a PPR JV with us and that was it – we got our goal,” said Jenn.

So, the Sanders went from no home and no prospects to very exciting prospects and a much rosier future. “We can see ourselves doing this for the rest of our lives. Property investing for us is an exciting and fulfilling journey.”

The Sanders are living proof that it is never too late to start again.

And, in September 2017 we were able to buy own home… So we’ve got our garden and shed back! 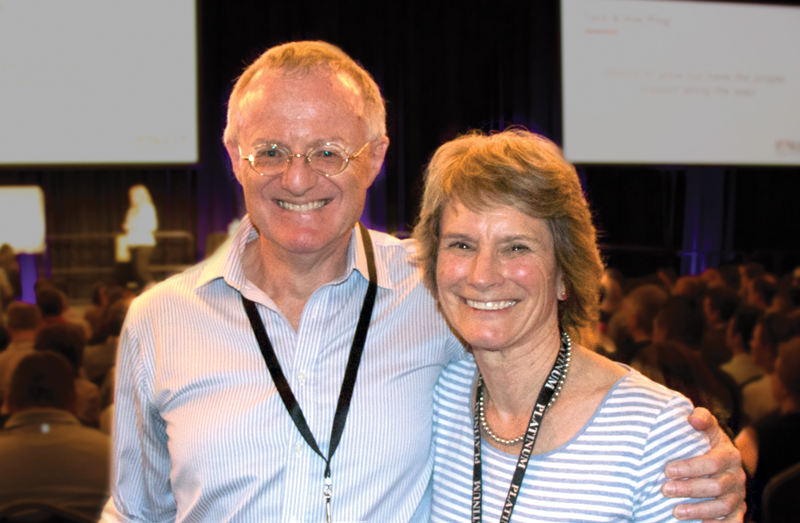