Mark and Amanda have found a way to generate $100K in passive income a year… and spend a heap more time with the kids!

Mark and Amanda’s business ventures earned them a living but kept them too busy to “be there for their kids”. After a few lessons in real estate, they’ve engineered a massive reduction in hours and a huge increase in pay.

They were 75km outside of Melbourne when they received a call from their son’s school. He had been hit in the head with a cricket bat and needed a ride to hospital. With a business to run, Mark and Amanda were both tied up and had to ask family to pick up their son.

That was the moment when a light bulb went on, and they realized it was time to find a better way to live. They had started five businesses across outer Melbourne, not all of which were successful, and the returns simply didn’t justify the responsibilities and all the time spent driving around.

They were sitting on some investment properties with modest positive cashflow but couldn’t do much while waiting for them to grow. They knew they needed more knowledge before they could take the step into full-time investing.

A customer at one of their businesses had had some success investing in rooming houses, and he gave Mark a tip about real estate educator named Dymphna Boholt. Mark dragged Amanda with him to a one-day event, and that was the beginning of the education they’d been looking for.

Although they were short on cash, the seminar helped them find start-up funds right in their backyard. They realized that they were sitting on a dual title opportunity with their PPR, which had a tennis court and a valuable ocean view in the backyard. They gave up the view, got some cash, and hit the property market.

By specialising in developing rooming houses, they were able to build both a successful management business and a profitable real estate portfolio, with over $500K in equity and a passive income of $100K annually.

Become an expert in something

Mark and Amanda’s singular focus on rooming houses has set them apart from other investors and led to benefits beyond just the investment income. Managing their own rentals saves them management fees and gives them the option to make extra money managing other landlords’ properties at premium rates.

They had three purchases in progress when they joined Dymphna, and the first step was to review those deals to maximize their value. Instead of buying finished products to rent, they learned to apply as many strategies as possible to improve each property, and stacking strategies like this has made a big difference in their returns.

Deal 1: A spa for somebody else

The first deal immediately proved the power of their new strategy. It was a single family home priced at $210K. Before their property education, they had intended to rent it as-is for around $300 weekly, doing just a little better than break-even on the rent.

Instead, they spent an additional $40,000 to convert the dwelling to an eight-bedroom rooming house. With a fancy ensuite, the master bedroom alone rented for $280 per week and has not been
vacant since.

After renovation, renting all of the rooms gave Mark and Amanda $30K in passive income, and the renovation released an additional $45,000 in equity.

Deals 2 and 3: Keep doing what works

The other two properties that were in progress turned out a little less impressive than the first, but they were still solid deals after renovation.

The third one, quite a bit larger, was a five-bedroom, two-bathroom home for $367K, originally renting for $900 per week. With $30,000 in updates, they converted it to a seven-bedroom, three-bathroom and rented the rooms for $1,300 per week; the difference in rent would make up for the renovation cost in just a year and a half.

At this point, they needed to start finding some more capital gains to keep funding their investments. From Dymphna’s course, they knew they could have it all if they found the right properties to subdivide, selling some parts while holding others for cashflow and future growth.

They located a house on a corner lot that had enough space behind it for two new rooming houses and bought the property for only $115K, inviting a JV partner to help plan and build two five-bedroom, 2 bathroom structures.

The DA approval took twelve months due to a few errors. At one point, it was approved but without provisions for sewers, so it had to be redone.

Fortunately, the existing house is rented for $400 per week, so Mark and Amanda are currently making a modest income from it while they wait. Once the development is done, they intend to sell the new structures for capital and then manage them on behalf of the new owners for 30% of the rent.

From there they started ramping up the scale of their deals, helped along by another JV partner. The next property was another big lot; this time, they planned to tear down the house and build three new rooming houses. In this case again, the DA approval was delayed, but when everything is finished they will keep one house, sell one for cash and manage the third for their partner.

Working with a new JV partner, Mark and Amanda’s next deal was a corner lot with a six-bedroom, one-bathroom house. They set to building two nine-bedroom, four-bathroom structures behind it.

With each deal, they refined their tactics to try and maximize their returns and determine what worked best. With this deal, they began planning their builds to include more ensuites and kitchenettes in the bedrooms to attract tenants who would appreciate the extra privacy and amenities, and who would also tend to stay longer.

On this property, they will keep the original building for themselves and manage the other two on behalf of their JV partner.

Deals 7 and 8: Making it look easy

Repeating the same kind of deal several times has made the standard process much easier.

Their seventh purchase was a house that came very cheap for its area, only $132K for a two-bedroom structure. They converted it to three bedrooms and rented it quickly for positive cashflow while securing approval to build a seven-bedroom, four-bathroom rooming house in the back.

For the eighth deal, they’ve got a lot with a DA approved to build 3 three-bedroom, three-bathroom units, a step up in luxury from their normal builds. They’re just waiting for a new JV partner to bring in some money for the construction.

Most recently, Mark and Amanda picked up a smaller deal: an existing rooming house to renovate with no subdivision or construction required this time. They got vendor financing so they didn’t have to put up much cash, and they converted the place from four-bedrooms, four-bathrooms, four-living rooms and one kitchen to five of each, effectively creating five separate full rental units that only share a laundry. The renovation went quickly, and the property now rents for a total of $1000 per week.

The power of knowledge

Before meeting Dymphna and really learning about property, they had some acquaintances who were into unit developments, and they were intimidated at the idea of doing that kind of project. Now they’re experts in their particular real estate niche, with 19 properties generating income, and they feel like they can do anything.

They have become a go-to source of information on rooming houses for their fellow investors. Mark helps developers negotiate with local councils who sometimes hold up deals due to misunderstandings, and he is working publicly to get local laws changed to make rooming houses more attractive investments. He hopes that his efforts will help put more low-cost housing on the market. 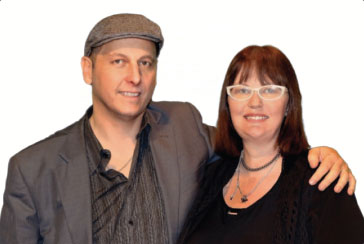 “Instead of buying finished products to rent, we learned to apply as many strategies as possible to improve each property, and this has made a big difference in our returns.”