Within three short years of joining the ILRE community, their lives had been completely transformed.

Kevin returned from a tour of duty with “shrapnel in his soul”.

Kevin flies helicopters. For twenty years he flew combat missions for the Australian army, completing a number of distinguished tours of duty, including Afghanistan.

He returned home uninjured but the trauma of war stayed with him for years, developing into crippling post-traumatic stress disorder (PTSD). Kevin began withdrawing from the world. This process culminated in 2008 with a breakdown that left Kevin barely functional and hurting deeply.

“I thought I’d failed my country, my community, my family.” – Kevin

PTSD had driven this family to the edge. While Kevin was wrestling with his life, Megan felt like a prisoner – unable to invite even close friends over. Kevin and Megan could see no way out.

Kevin also lost his father in 2012. It hit him, “like a brick to the head.” His father had worked for 45 years, retired “without so much as a thank you”, and passed away 6 years later, with a good chunk of those few retirement years spent in hospital.

Determined to make the most of the gifts his father had given him and to escape a similar fate, Kevin found an ad for one of Dymphna Boholt’s information days. Kevin felt that this could be what they were looking for.

Megan wasn’t so sure, but agreed to attend “on the condition that we’re not signing anything!”

When they joined the ILRE community they found not just the skills to turn their financial lives around, but a community committed to honesty and growth. They found the support they needed for Kevin “to release the shrapnel from his soul” and for Megan to find herself again.

They quickly realised they had been “doing everything wrong.” They had negatively geared properties, they had bought off-the-plan, and they had spent too much on their dream home. Their two investment properties were costing them $45,000 a year, and their PPR had saddled them with a huge mortgage. This was taking its emotional toll as well. Kevin remembers, “We had no life. In the end I couldn’t stand that house anymore. It was killing us.”

The I Love Real Estate study materials gave them something to work on together. After the kids went to bed, they got into ‘Mum and Dad Homework’ and started working closely with their coaches.

Having since renovated their PPR to build equity and reconfigured the downstairs area to create cash-flow, as well as successfully navigating an “ambitious” development project, the Humphreys financial situation is substantially better and much less stressful.

Turning a Life Around

However, it is Kevin’s personal journey that has been most profound. He was unable to talk about his breakdown in 2008 until 2015 – at a ILRE Platinum conference! It was within this ‘family’ of support – with a community of people committed to honesty and personal growth – that Kevin finally felt safe enough to face up to the ghosts of his past.

“I hadn’t said a word about my breakdown for 7 years… And there I was crying at a Platinum Conference.”– Kevin

The daily practices that are a foundation to Dymphna’s training regime – the 7 Daily Rituals, the breathing exercise, the meditation, the gratitude practices – each of these began to work their magic.

Within three short years of joining ILRE, their lives had been completely transformed. Where Kevin had once felt a deep sense of shame and self-loathing – unable to let the ILRE conference photographers even take his photograph – he has now become a confident public speaker and a passionate advocate for mental health – particularly within the community of pilots and returned service personnel. This brings with it its own pay-it-forward effect. Within the last four months alone, Kevin’s advocacy and work has helped bring two men back from the brink of mental illness and alcohol addiction.

He is even now in the process of turning his remarkable journey into a book. “Releasing Shrapnel from the Soul” is slated for release on ANZAC day 2018.

Not bad for a program that was only ever meant to get their financial life in order.

Deal 1: Some Magic Maths on the PPR

Like many real estate journeys, they started with their PPR to build a base to work from. Using Dymphna’s Grid Variance Analysis, they realised there were probably some easy gains to be made with renovations.

They took the rumpus room, which was oversized, and put in a dividing wall. At a measly cost of $5,000, they added an extra bedroom, and increased the valuation of their property by $150,000. As Megan says, she’s never cared much for numbers but she liked that maths!

Deal 2: Whoops! Honey, I did a 7 Townhouse Development

Their next deal ended up being a 7 townhouse development, though they never intended to set their sights so high so early.

Purchasing a property in Toowoomba, it was meant to be an easy “set and forget” development. They planned to subdivide the property, keep the house on the front and build on the back.

However, the block ended up being just 300mm short, and they were unable to subdivide it. They looked at a strata title but that didn’t work either. In the end, the only way they could make the numbers stack up was to build 7 townhouses.

They knew they were in over their heads, but luckily they had some experts they could lean on. As Kevin says, “The only way we got through this one with our shirts on was with Dymphna’s guidance.”

Thankfully, Dymphna was able to help them avoid what could have been a financial black hole, and it now looks like the Humphreys should be able to book a $100,000 profit on the deal.

“I really value having a coach who can help you see what you can’t see. And in my case, my coach really gave me the tools to help me be me.” – Megan

They then went back to their PPR, creating a self-contained unit underneath their house. The extra bedroom and bathroom cost them just $54,000, but again increased their equity by $150,000.

They now rent the studio out through AirBnB, with an 85% occupancy and generating $24,000 pa passive income.

Megan is really enjoying the people-side of this work, and she achieved ‘SuperHost’ status in her first quarter!

For Megan this is one of the signs of just how far she and Kevin have come. “There’s no way that I could have imagined just three years ago that I’d be inviting total strangers onto the property. I couldn’t even invite close friends over.”

These days, they feel much better about their financial situation. Their cash flow position is almost $40,000 a year better off, they have three additional investment properties, and they have almost doubled the value of the PPR.

However, it is the transformation they have seen in both of their personal lives that makes them ‘eternally grateful’. Kevin found the strength and support he needed to “release the shrapnel from his soul”, and he has become an inspiring example of the vulnerability and courage it takes to face your demons.

Megan had also thought that she would be supporting Kevin and his depression for life, and she cannot believe the freedom and expression she has now found, especially through AirBnB hosting.

They never imagined that joining the ILRE community would be such a personal revolution, but then as Dymphna says, magic happens where dreams and action meet. 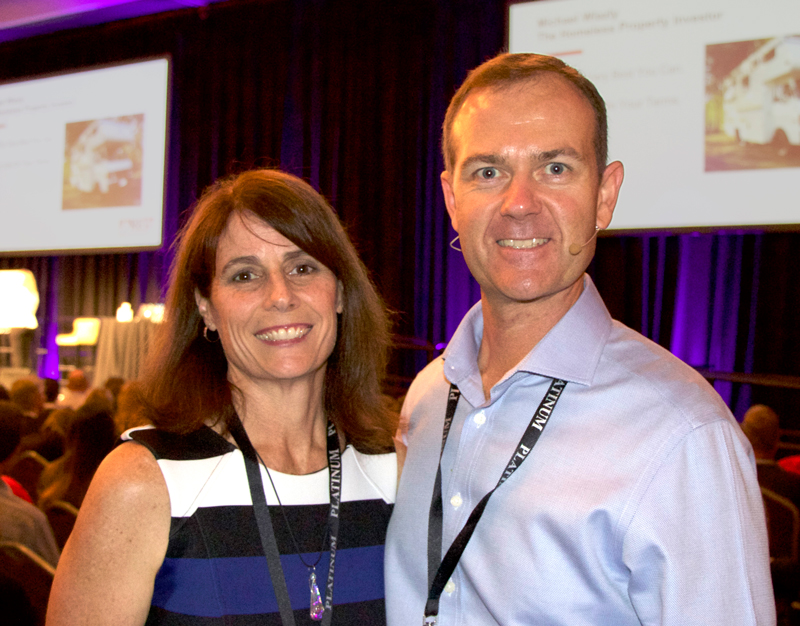 “Men still aren’t having a conversation about Mental Health in Australia. But I’m out there having that conversation.” – Kevin

Turning their financial lives around