With the right advice, Anna and Melvyn built a massive $3.5m property portfolio with $30K in passive income.

Anna was determined to find a better way to live than working in the corporate world. Despite failed business after failed investment, she refused to quit, and now all of her effort has paid off.

Nine years after moving to Australia from Kenya, Anna and Melvyn are enjoying great success, and they’ve certainly earned it.

Coming to Australia had been a lifelong dream for Anna. Between poverty and political unrest, she and Melvyn always knew they would need to leave Kenya to find a better place to raise a family.

The opportunity came shortly after their wedding. They gave away all of their new wedding presents and reached Sydney with two suitcases and $10,000 in cash to start a new life. They started with no work, no family and no connections.

After they immigrated, Anna found a new dream. While both she and Melvyn found regular employment, she began spending her free time studying for professional accountancy exams and launching new businesses, desperately trying to gain a passive source of income.

One day, she stumbled upon a Dymphna Boholt seminar invitation inside a motivational book. She and Melvyn were inspired by the seminar and quickly dove into Dymphna’s Ultimate course. Now, after five years of practicing what they learnt, their investments have reached $3.5 million in equity and are generating $30,000 p.a. in passive income.

“With four failed businesses and a bad start in real estate, we thought we were never going to make it.”

Perseverance and determination are the foundation of the their success story. Due to the difficulties of adjusting to life in a new country and trying to make time for both work and study, Anna failed her professional accountancy exams twice before finally passing on her third attempt. Her business ventures were another string of failures, but she never stopped learning and searching for the project that would finally pay off.

The final setback before their luck turned around was an ill-advised property deal in 2009. It was an off-plan unit in southern Sydney with extremely high strata fees to pay for a gym, pool and lifts in the building. It was losing them money for a while, but fortunately, with the general rise in values across Sydney, it has since become cashflow neutral.

In 2010, after nine months of carefully working through the Ultimate course, they made their first investment with their new real estate strategy, and it turned out to be just the kind of success they were waiting for.

Anna and Melvyn’s first priority was still passive income, and the first property they found was a three-bedroom, one-bathroom home in a mining town in Queensland. They picked it up for $200K, and it rented for a decent price right away.

Then, the mining boom suddenly lifted the value of the home to $320K, which was faster than anyone had expected. Anna and Melvyn took this windfall and drew cash out of the home to fund their subsequent purchases.

The value of the house has dropped considerably since then, and it may be underwater soon, however this doesn’t necessarily make it a bad deal. The money that Anna and Melvyn took out of the home has been well-used in other investments, so it’s up to those other properties to make up the loss, which they definitely have.

Deal 2: Make sure you insure

Next, they started buying closer to home, with a quick renovation on a two-bedroom 1950s unit in southern Sydney. The total cost was $343K, including $36K in cosmetic updates that made the place easy to rent for neutral cashflow. It has since appreciated by $84,500, which they are redrawing this year to spend on newer investments.

There was one complication with this deal: a while after it had been rented, Anna and Melvyn found that it was occupied by six people living in two bedrooms who had done some damage to the property. Their agent had failed to conduct the appropriate inspections. Fortunately, insurance reimbursed all of the damage, so they didn’t lose any money in the process.

For their third deal, they stayed in southern Sydney and bought a three-bedroom home for another simple renovation. It was rented immediately, making it cashflow neutral, and the renovation was completed in 2014.

Unfortunately, just a month after the renovation, they had another tenant problem. The couple who were renting the home had been good tenants—until they split up. One of them didn’t handle the break-up very well, and he put holes in the ceilings and walls. As before, the good news was that at least Anna and Melvyn had insurance to cover the damage and the lost rent.

They recently got approval to build a granny flat next to this house, which they expect to rent for $7,000 p.a, making the whole deal strongly cashflow positive.

The fourth deal was an excellent find, but it took a lot of work. It was a distressed triplex in the Hunter Valley, which had been sitting on the market for a while.

Anna and Melvyn bought the property for $405K and spent $160K more on a major renovation. To reduce costs, Anna personally managed the project, but that meant constant three-hour drives to and from the place with her four-year-old daughter.

They spent 12 weeks on the renovation and spent the final day personally cleaning all three units well into the night. After their final long drive home that night, they were treated to a nasty surprise: their house had been broken into and trashed.

The burglars had taken a little bit of cash that the family had been saving as a reward for themselves after the renovation. Unfortunately for Melvyn, when they called the police over, he learned that he would have to clean up all of the fingerprint dust himself—just after spending all day cleaning the rental property.

But at the end of the project, all of the work and inconvenience had really paid off. The three units are now generating a total of $15,000 in positive cashflow, and even after the costly renovation, the property has appreciated in value enough for Anna and Melvyn to draw $68K back out of it this year.

For her next deal, Anna wanted to try something different, and a friend of hers had had some success investing in the United States. She booked a ticket to a five-day real estate investment conference and flew 23 hours with her young daughter to attend.

At the conference, a number of properties were being sold to attendees in a lottery process. Anna had her daughter pick numbers out of a hat, and her “lucky angel” got them three wins. Anna gave one up to a woman at the conference who would otherwise go home with nothing, and went ahead to purchase the other two.

She bought these two properties in Texas for $62K and $74K (Australian dollars). They are bringing in $15,200 in net rental income, and in two years, both have appreciated in value by nearly 100%.

Returning to Australia, Anna and Melvyn lined up their biggest deal yet in South Sydney and turned a tough seller to their advantage.

The seller was making it difficult for anyone to see the property, which turned off other potential buyers, but they were able to figure out what a great deal it would be and made the purchase without competition.

This was a large house with an entire lower floor built as a dance studio; it was a perfect opportunity to manufacture value by converting the lower floor into a separate unit. Building a separate secondary dwelling would typically cost upwards of $120K, but in this case they were able to plan a renovation for just $70K.

With a total cost of just over $1 million, the estimated new value of the property will be $1.1 to $1.2 million, giving Anna and Melvyn a substantial immediate return on their investment along with two rental units for more passive income.

Persistence has paid off

Every one of the Anna and Melvyn’s property deals came with some hardship or difficulty that they needed to overcome, from destructive tenants to late night drives and burglars. But they never let any of their setbacks stop them, and now they have a portfolio of 12 units bringing in the passive income that Anna had always hoped for, with plenty of equity available to let them keep investing.

Remembering their roots, the couple is using some of their funds to sponsor impoverished children abroad. Their goal is to sponsor one new child every year, and they currently support two girls in Kenya and one in Bolivia. They have also picked up the therapy costs for Anna’s father, who became partially paralysed after a stroke in 2009.

Anna and Melvyn say that the most important steps they took were investing in their education and connecting with like-minded people to inspire one another and share the journey. 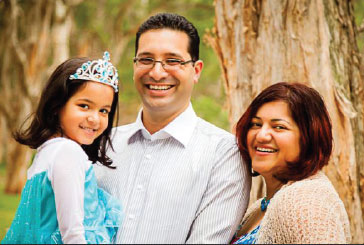 “We’ve not always been on the same page because I was employed full-time in a demanding job. I had to just really support her, work as a team and trust her to know what she was saying.”