Jason had a building business that went bad.

Relying too much on people that in the end just couldn’t be trusted, Jason saw his once profitable business taken out from underneath him.

Not only did he find himself without his livelihood, he also found that he had a tax debt to the ATO of over $300,000.

With a total debt burden north of $700,000, Jason and his partner Mary almost lost their home and had a tough fight on their hands to keep bankruptcy from the door. Jason had his faith in people tested, and he found it difficult to trust anyone. He just didn’t know if he could start over.

However, after attending an I Love Real Estate presentation in Hobart, Jason was impressed with the ideas and strategies on offer, and signed up for the Ultimate program.

Armed with a 30-point action plan and a brand-new mindset, Jason took what he learned at the Ultimate program, and with just one deal, managed to replace his entire income, and build $800,000 worth of equity.

“We can’t believe it ourselves but we have done it. This is a life changing deal for us.”

With a background in business, Jason was drawn to commercial property. After they had skilled up through the Ultimate program, they found the deal they were looking for, almost immediately.

Situated on the Highway within minutes from the Huonville shops the property was a 3437sqm commercial complex on 1.5 acres of land with an asking price of $830,000. With main street frontage, an excellent location and mistakenly listed with a residential agent, Jason and Mary could see it was a hidden gem.

Upon further research, they found that the property had five separate business under lease with plenty of opportunity for more. It also had subdivision approval and strata potential at the rear of the property. One of the businesses was a warehouse with thirty-five storage units, and there was room to add more.

Currently, the property returned a positive cashflow of $21,000 pa. Jason ran the numbers and calculated the ROI at 14% – even before they had tapped the property’s full potential.

Jason and Mary immediately made an offer of $800,000, but threw in a handful of important conditions:

• Access to site and consent to approach council for plans and records; and

To their delight the conditions were accepted, but the owner wouldn’t budge on the asking price of $830,000.

Within 30 days of discovering their treasure chest, they had received finance approval from two different lenders. Jason and Mary sat down and wrote a 30-point action plan for maximising the returns on this deal.

Their first strategic move was to negotiate a ‘win-win gentlemen’s agreement’ with the owner, allowing them to start works before settlement. They also arranged a new lease agreement prior to settlement, which enabled them to increase the term of lease and reset the rent to current market value.

In the end, Jason and Mary settled three months early, and within ten weeks of ownership applied the following manufactured growth strategies:

• They were able to add a hardstand lease, since the agent had massively under quoted the available floor space;

• They increased all leases to market rates; and

The new value of the property is $1.16m, the estimated positive cashflow is $51,000 and they still have room up their sleeve with an option for extra tenancies or filling more storage units.

Jason and Mary now have the cash-cow they were after.

“It’s possible with just one deal.”

Having replaced their income with a single deal, and with their financial situation totally turned around, they have a new lease on life. They’ve regained their confidence, or as Mary says, Jason “has got his mojo back.”

They stress the importance of education for showing you just what is possible, and what pitfalls to avoid. It is not rocket science, but there are a lot of things you need to be aware of, especially when you get into commercial property.

They also emphasise the power of networking. Once people know what you’re capable of, people start coming to you with deals and joint-ventures, especially in a small community like Tasmania. 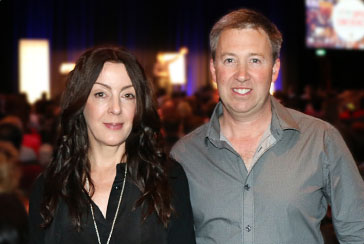 “There is no way that I would have done this deal without the training. I definitely wouldn’t have even looked at Commercial.”