Truth Bomb Tuesday: Got excuses? Do this! 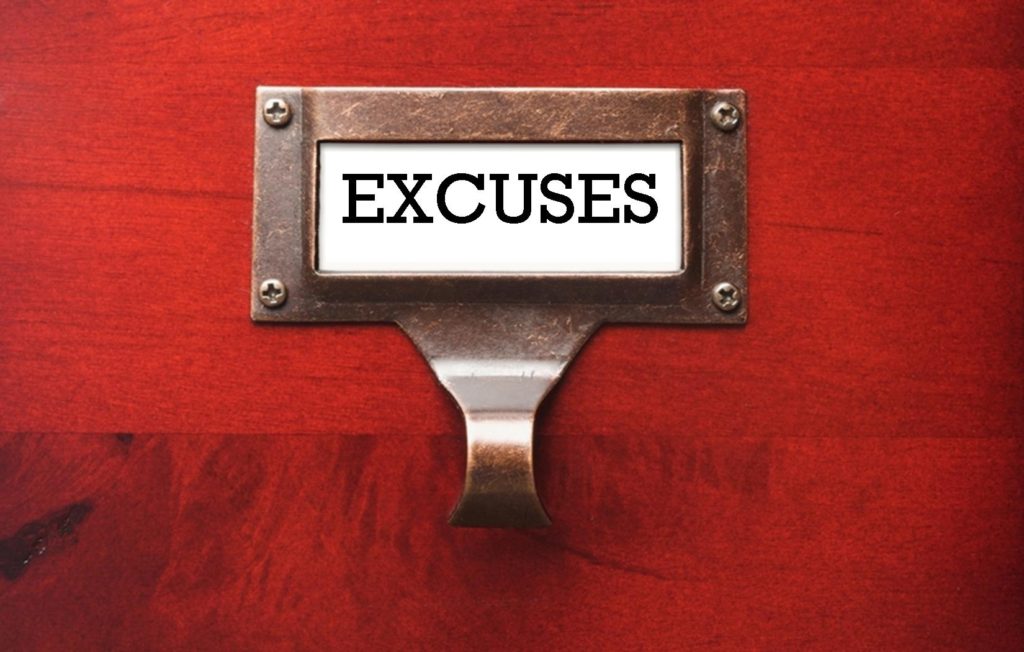 You are tougher than your excuses.

I have a little practice I do every Spring around the new moon, as I light some incense and put on Whalesong greatest hits Vol IV.

I get together all the excuses I have for why I’m crap at stuff, and I audit them.

I go through them, one by one, and make sure they’re still relevant.

“I’m not great with money because I’m no good at maths.” Still the case?

“I avoid people-work because I have no charisma.” More of the same this year?

“I’ll leave the decorating to my hubby because I’ve got no sense of colour.” Is that still true?

One by one I’ll go through them and put them under the micro-scope.

If you push against them, even a little, they give way.

And our excuses are rarely as tough as we think they are.

Ok, I don’t actually really do this. I don’t have a list of excuses written down in one of my notebooks.

But that’s not because it wouldn’t actually be very useful to have a complete list of your excuses, written down on paper where you can examine them regularly.

It’s because our excuses tend to be a bit good at hiding away in the shadows. We often don’t even realise they’re there. They become part of the furniture – just a part of the mental picture we call reality.

So, “I’m not good at maths” isn’t a statement of belief, or even a statement about ourselves.

It’s a statement about reality itself.

And since it is about reality, it is immutable – not subject to change.

And after a while we forget to notice it. It’s like the lamp in the living room. You forget it’s there unless someone points it out.

So before we can test how tough our excuses are, we actually have to dig them up. We have to watch ourselves carefully – and watch out for those beliefs masquerading as reality.

And if we can, we should definitely test them regularly (ideally in a flotation tank, with essential oils).

Because we can form these excuses early, lock them into our picture of reality, and then just go on carrying them from year to year, never really checking if they’re still true.

So sure, maybe you didn’t do great on your year 3 maths test. But that was a long time ago. Are you sure you’re not up for the relatively basic maths involved in a feasibility study?

When you’re mentoring someone, this stuff is really the low hanging fruit. Some core beliefs are very difficult to shift – I’m thinking about some of the stuff that imprints really early, around love and self-worth for example.

But some stuff is quite easy to shift. Sometimes all it takes is to bring attention to it. To go “hey, did you notice that? That excuse you just used? Is it really true?”

So no need for a dark moon ritual, but take a look at the excuses you are using right now. The bad back, the lack of time, the unsupportive family, the lack of capital, the nameless fears…

Take a look at them and test them. How tough are your excuses really?