Rebecca and Sarah have been lifelong best friends since meeting way back in Year 7. In 2009, they were ready to begin their real estate journey. Both of them had put tremendous effort into reaching this point, and they were desperate for a change.

Sarah worked up to 15 hours a day, nearly every day of the week, with frequent overseas travel that took her away from her small children. She worried that they were growing up without a mother.

Rebecca put all of her resources into a homewares business in 1997, which floundered for five years and ultimately left her with nothing. For another five years, she lived in poverty to save as much money as possible for a new start.

Overcoming adversity, they started investing, and they never slowed down. After lining up an impressive string of deals, they were both able to quit their jobs around the beginning of 2015, and within the next two years, their combined portfolio is projected to exceed $10 million.

The first step is the hardest

After Rebecca and Sarah attended a three-day boot camp with Dymphna, Sarah returned to work full of ideas but still not sure how she was going to get started. Rebecca wasn’t quite ready yet, but Sarah went on to join the Platinum program, and her first step landed in her inbox.

Another couple of investors, Jason and Amy Byron, were looking around the Platinum community for a JV partner on a deal in Brisbane. When Sarah got a message from them, she jumped at the opportunity.

Still working long hours, she didn’t have much time to devote to the deal, so she went in as the cash partner to purchase a house on a large lot. They subdivided, renovated and sold the existing structure to recoup some of their costs, and built a new dwelling on the second lot.

After the deal closed in 2010, they actually lost money due to the GFC and the Brisbane floods; however, Sarah had done enough research on the market in the area to be confident that property values and rents would pick up, and the purchase got her foot in the door of the real estate world.

Deal 2: Getting Rebecca on board

Happy with their partnership, Jason and Amy invited Sarah to participate in their next deal, which was quite similar. Again in the Brisbane area, they found a property to subdivide. This time, they demolished the original structure, and they sold one side of the divided property to Rebecca, who was now in a position to begin investing alongside Sarah.

They built new homes on their respective halves of the property, and despite some loss in value due to the floods (not directly damaging the property but affecting the citywide property market), they finished the renovation $200,000 ahead of their starting position, holding on to the properties to benefit from future gains.

In 2013, Sarah was still tied up by her work, so Rebecca took responsibility for sourcing their next deal along with a new JV partner.

Purchasing a house on two lots in Wynnum, they closely replicated their previous deal. They demolished, divided, built and held for another $220K profit… in less than a year!

Deal 4: A needle in a haystack

With some funds available from their first few deals, Rebecca started looking toward properties that would generate some cashflow. She fancied owning a place on the Sunshine Coast, although her father told her it was a bad time to invest there.

She did her own research, saw that the market was beginning to change in the area, and came across an incredible find. It was a $470K, six-bedroom house in an excellent location. She had it under contract less than 12 hours after finding it. Rented by the room, the place is now pulling in over $25K in passive income.

At this time, Sarah’s employer went into liquidation and she found herself temporarily out of work. Now that she was able to put more of her own effort into investment, she wanted to start scaling up.

The next find was a 1940s Queenslander in Morningside. They purchased it off market through an agent who Rebecca knew. They weren’t allowed to demolish the original house, but instead, they lifted it up and moved it forward on the lot to make room for two new townhouses in the rear.

One of the neighbours was upset about the off market sale—he wanted to buy it himself—and took them to court over it. He attempted to delay proceedings and interfere with their project as long as possible, but fortunately, the judge was on Rebecca and Sarah’s side, and the lawsuit ultimately only cost them two months and $30,000. They were free to move forward.

After completing the subdivision, renovating the old house, and building the new dwellings, they were prepared to sell the whole property for a $380K profit, but they reconsidered. They decided that selling would not leave them any better off than holding and drawing equity while the property was likely to continue appreciating, and now, two years later, the total profit on the deal is closer to $500K.

The two friends were moving faster and faster as they gained more development experience. They found themselves in the right place at the right time to jump right into another deal much like the last one.

It was another 1940s Queenslander. This one was in bad shape and would need plenty of renovation, but just like the last one, they picked it up, moved it to the front of the lot, and planned three townhouses in the rear.

Due to an encumbrance on the property, they were forced to give a four-metre strip on the front of the land to the town council, which made the space very tight, but they were able to proceed with their plan.

The construction on this property is currently underway, and Rebecca and Sarah expect to sell it this autumn for a profit of over $600K, the first major cash payout they’re taking from their investments.

Eyes on the prize

While the two Queenslander deals were underway, Sarah had to find another job to make sure she had an income. She ended up working for a year in China and leaving her kids in boarding school. Meanwhile, Rebecca had also fallen into a pattern of 13-14 hour work days, and the stress was taking its toll on her.

They both needed to free themselves from their day jobs, and to do that they needed to generate more income from property. With several successful development deals behind them, they were now in a position to approach new JV partners with the skills they had learnt.

The same agent from their first Queenslander development found them another one with room on the lot for three new townhouses. This time, Rebecca went in on a JV with a money partner so they could keep funding deals of this size.

They started a major renovation on the dwelling—at least they didn’t have to lift it and move it this time—and got a DA approved for the new structures, which are set to begin construction soon. After the project is completed, they expect a return of $650K, split with their JV partner.

Finally, they were ready to make their move. They were fed up with work, and at the end of 2014, they had enough cash to live on until their major chunk payout in October or November. Sarah quit her job at the end of the year, and Rebecca followed soon after.

They tried something slightly different with this deal, working with their old JV partner from the Wynnum deal and splitting another block in Camp Hill. This time they could destroy the old house, and instead of townhouses this time, they planned two high-end luxury homes with much higher property values.

Once the build is complete, they expect a $350K return on this development, split with their partner.

On the same day as the Camp Hill purchase, the two friends went in for a bigger development with a new money partner on a property in Greenslopes. They purchased with extended settlement terms and planned to build five townhouses.

Planning for the project went ahead, but unfortunately, months into the process, their JV partner walked out and left them without funds. They’re currently negotiating a new settlement term so they can keep the deal and finish the development on their own.

Once the new arrangements are sorted out, they’re looking at half a million dollars in gains from this deal.

Now that property was their day job, Rebecca and Sarah wanted to step up to bigger, more challenging, and more profitable investments. They hooked up with yet another JV partner who was able to bring plenty of cash to the table.

Their latest project is a development on three lots in the northern beaches suburb of Manly. They bought from two different sellers with extended settlement terms and are planning a total 15-17 units. When the project is completed in the next couple of years, they expect a return of $1.5 to $2 million.

Once they started investing, Rebecca and Sarah picked up momentum fast, and they show no signs of slowing down. In the six months since quitting their jobs, the two friends have already launched three development projects.

They aren’t working 16 hour days anymore, but they’re clearly keeping busy; just not too busy. Sarah used to worry that her kids never saw her. Now she gets to drop them off and pick them up from school. 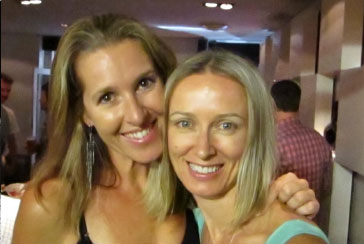 “With several successful development deals behind us, we were now in a position to approach new JV partners with the skills we had learnt.