How “two boys from the bush” started with $60,000 in debt and bought a house they rent out on Air BnB.

Brothers Jayden and Murray Hansford are “best mates who do everything together”. Growing up on a farm out the back of Tamworth, NSW, the boys finished school and got a personal loan from the bank for $30,000 each – only to blow it all on “motorbikes and travelling”.

After a year of wild adventure, they returned home to find their huge debts were a stone around their necks. They both took jobs at the local abattoir to slowly start chipping away at the mountain of money they owed, but the work never excited them.

When Dymphna put the call out for The Property Games, they knew they had to jump on it. The brothers had a leg up already – they had attended various ILRE boot-camps with their parents, and they were at the event where The Property Games were first announced. They started putting the hard word on Dymphna. As she recalls, “I got bombarded. I got bribed. I got cuddled.” Their bid for attention paid off, and refusing to be separated, they were accepted as a team into The Games.

“It took time to understand and get a handle on what kind of deal we were looking for – so we just looked at everything.”

Wanting to be closer to the action and the huge amount of training on offer, the brothers packed up their things and relocated to Brisbane, transferring to a Brisbane-based abattoir. Unaccustomed to the rigours of study, Jayden and Murray admit they found it difficult to keep up with the training materials and books they were given.

At the Super Conference in Melbourne 2015, they met with their competition, and formed immediate friendships.

Cut from the lovable Aussie larrikin cloth, Jayden and Murray networked like crazy during the training events, building a solid team of real estate professionals to work with, and finding a JV partner to help fund their journey.

By the end of three months, they were market ready and had found their first deal. With many Property Games competitors still wrestling with the materials and getting their heads around the basics, the boys found themselves at the front of the pack.

“Finding an old house and renovating it can be difficult, especially if you aren’t handy yourself, because the costs can blow out very quickly.”

Deal 1: The Worst House in the Best Street

As their “organiser in chief”, Jayden and Murray’s mother conspired with a local Tamworth real estate agent, turning up a promising property in the “executive”, more expensive part of town. Their father, a builder himself, inspected it, and the brothers did a feasibility study and quickly shot it off to their mentors. With the green light from Dymphna, they put an offer in and got it for just $390,000. They were off and racing now, and their strategy was to renovate the property to a high standard and sell for profit.

However, once they set to work and opened the house up, problems started to emerge and, as they said, “she just got worse and worse”. Over 100 years old, the house hadn’t been built square, and the misalignment was creating all sorts of issues.

Accustomed to hard work, the boys quit their jobs at the abattoir, moved back to Tamworth, rolled up their sleeves and set to work full-time on the renovations.

With the help of their father, they gutted the house completely and put it back together bit by bit, learning as they went.

The boys were working flat-chat, but when Tamworth’s drought broke and the skies opened, they found their work schedule was totally derailed by the rain. As it became clear that they weren’t going to be able to complete and sell the property by The Property Games deadline, they decided to prematurely put it up for auction.

The local press and real estate agents rallied behind them and they attracted over 60 viewers; however, they couldn’t get the price they were after, and the auction was passed in. Nevertheless, the attention and interest in the property left the boys feeling confident that they would be able to make their mark in the not-too-distant future.

“To keep costs down, we did all the work ourselves, only calling in the specialty trades. We really didn’t know what we were doing, but we were prepared to give it a go!”

Although the boys weren’t able to successfully complete their strategy by the time The Property Games finished up, they’ve put themselves in a solid position.

They purchased their property for $390,000 and spent a further $250,000 on renovations, although this was a good $100,000 more than they expected. Add to this their JV partner’s return, agent fees and various miscellaneous project, and the boy’s total project spend comes to $750,000.

Their pre-completion valuation came in at $750,000 – $800,000. If all goes to plan, the boys will sell the property with an established Air BnB income stream.

With the gift of hindsight, Jayden and Murray agree that there were “too many unknowns in an old house.” Partly due to a lack of experience on their part, and the delays driven by the rains, the renovations took much longer and cost considerably more than anticipated.

Moving forward, the boys want to continue with property and try their hands at subdivisions, more renovations and ‘House in Multiple Occupancy’ (HMO’s). With plenty of potential JV partnerships in Tamworth alone, the boys see property as a way to fund their passions.

They’ve also been offered jobs from the tradesmen they employed, which will give them the serviceability they need to do more deals in the future.

While their deal was solid, if not stellar, the brother’s chalk it all up to experience, and see it as another interesting chapter in their life together. 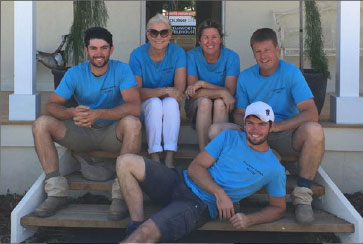