How DJ helped his parents build a million dollar portfolio with almost $100K of passive income in just 18 months!

DJ couldn’t watch his parents living like this. Having always been their own boss, Des and Shona had left Victoria for WA to take a job working for somebody else. But after two years they had lost their sparkle.

They had become “puppets”, in Shona’s words, and very unhappy. So DJ secretly enrolled them in one of Dymphna’s courses. The first Shona heard of it was when someone called to check their credit card details.

But they took the opportunity for what it was and threw themselves into Dymphna’s “university”. For three and a half weeks, Des and Shona immersed themselves full-time in the materials, the CDs and DVDs, rewinding and going over sections to make sure they hadn’t missed anything.

Des and Shona had left Victoria with no retirement plan and just $110,000 in savings. Within 18 months of joining the Ultimate program, they had built a million dollar portfolio that delivers $100,000 a year in passive income.

With their own futures provided for, they have turned their attention towards making a real difference in the remote communities they call home. They’ve even given up the rent on one of their properties so it can be used as a church and training centre.

Having started the whole ball rolling, their son, DJ, is now also in on the game, with two properties (at a total monthly mortgage bill of just $291 a month) to his name and on the
hunt for a third.

Gold in the Hills

Des and Shona’s property success has been built by daring to go where many fear to tread – The Bush. Their portfolio has been built around remote communities of North West WA, and they’ve manufactured growth by taking a ‘cookie-cutter’ approach to renovations – using the same plans and materials on a number of successive renovations.

In particular, they’ve made a lot of mileage out of targeting their rentals at government officials – people who have work in the town of interest but ending up staying in a motel three hours away because there’s no where to live in town.

With a focus on neat and clean accommodation, they’ve been able to score city-rents on a bush budget.

Looking to make the most of the cash they had available to them, they got into a deal where they were able to get three dwellings on two titles for just $60,000. A former drug den, it had no tenants currently in place because the properties had been deemed unliveable.

But they got to work, and working alongside the future tenants, managed to get the properties up to scratch. Even though the renovations were common sense, their properties ended up being three of the flashest properties in town, and locals were cruising by in their cars to take a peek.

Living in one dwelling and renting out the other two, they were able to use the passive income and the manufactured equity to get into their next deal.

“They’d been working for the big man for two years. They were really entrepreneurial, into all kinds of different things before, and then they just lost who they were. They’d become a shell of their former selves.” — DJ

Keeping their focus in the same town, Des and Shona bought a duplex for $55,000. They then spent $30,000 on renovations, turning it into a single six-bedroom family dwelling, recently valued at $240,000.
Originally renting for $420 a week, they’ve now been able to rent the property out to contractors for $850 a week. In case your calculator is out of batteries, that’s cashflow positive.

Des and Shona have used this model, and the materials and designs to do five similar renovations in a cookie-cutter style.

Deal 3: Get the cookie-cutter out Augusta St. $65K. Same strategy.

Giving something back With their wealth secured, Des and Shona are determined to use their passive income to give something back to their community. One of their many achievements is a substance abuse program that helps indigenous communities deal with the evils of alcohol and drugs. Rather than the one-size-fits all programs applied by various governments, they have been asked by local Wangai and Pitjantjatjara elders to use their local knowledge and connections to help heal the community.

They’ve also given one of their houses back to the community to use as a church and training centre. They’re giving up $800 a week in rent they could be getting, but as Shona says, “We know it doesn’t make financial sense. But it makes heart sense.”

DJ, Des and Shona stress how central the Ultimate program has been in their success. All of the resources have been laid out and have been tried and tested. There’s no need to reinvent the wheel yourself.

They are now using their resources and free time to really engage with their community – from driving ambulances to helping to run the supermarket.

For them, real estate has been a vehicle to build real joy and meaning into their lives. 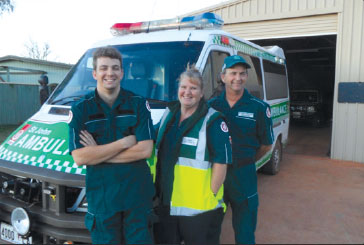 “With a focus on neat and clean accommodation, we’ve been able to score city-rents on a bush budget.”

They have used this model, and the materials and designs to do five similar renovations in a cookie-cutter style.