How an unemployed refugee became an international property millionaire and started paying himself $180,000 a year!

Wilson Tieu came to Australia 40 years ago as a refugee. When he lost his job in IT, he turned to property investment to turn his life around. With a focus on the US market, Wilson has built a six figure salary for himself from scratch and has never been happier.

Wilson calls himself a ‘slow learner’, but that hasn’t held him back. What he might lack in speed, he certainly makes up for in vision and passion. And when you look at what he’s achieved in just five years – dozens of deals to his name and a passive income of $180,000 a year – it makes you wonder what Wilson’s definition of ‘quick’ is!

Wilson has leveraged his opportunities. He partnered up with some experienced investors through the I Love Real Estate network to skill-up as quickly as he could, and has set up multiple income streams through the intelligent use of management rights.

Wilson remembers that when he told his family about his plans to transform his life through property, they were sceptical. “Sometimes your family can detect the changes that are happening to you, and they resist it. It makes them uncomfortable. But you can’t let it stop you. You just have to tell them that you appreciate their love and concern, but this is something you need to do.”

When Wilson made his first forays into the American market, he made a decision not to tell his family until after the deals had become successful! But now, his family are happy. The proof is in the pudding. When he joined Dymphna Boholt’s Platinum program five years ago, Wilson had no job, no income and a pile of debt outstanding on his PPR. Now he works two months on, two months off, earns over $180,000 p.a and has ten properties in the US alone.

Putting in the time

Wilson’s story is all about hard work. He was able to reach his goals through tirelessly seeking new deals, always continuing his learning and contributing his own labour to take an additional share of income.

By contributing so much time and effort, Wilson was able to attract partners to cover for his lack of experience and cashflow. Eventually, with Dymphna’s advice, he was able to gain the serviceability he needed to do his own deals. When his JV investments started generating income, it enabled him to start prospecting in the U.S., where he took advantage of a weak U.S. dollar to put in a lot more work and landed a string of successful deals. Now he’s in a position to just keep building his portfolio and enjoy the life-style he wants.

“I had the confidence to move forward by myself, but I still couldn’t borrow money. So I needed a partner who could get financing.”

Although Dymphna Boholt’s Platinum course taught Wilson the strategies for success, he had no income and was unlikely to be able to secure the finance he needed to get started.

Fortunately, working with Dymphna also connected Wilson to a community of other investors. He sold his house, and took the cash from that sale and found a serviceability partner to make his first deal possible.
They started with a major renovation in Killara, Sydney. Working alongside his JV partner gave Wilson some hands-on experience and proved the worth of the investing techniques he was learning. More importantly, it lent him the confidence he needed to take his next steps.

The renovation was so impressive that it is now one of the examples Dymphna uses for successful renovations!

One deal wasn’t enough to give Wilson a lot of purchasing power on his own, so he found another serviceability partner to do some prospecting in the Hunter Valley.

They found a good property, renovated it and subdivided the lot. But in hindsight, Wilson realised that they moved too slowly on their development application. By the time they had an approved DA, growth in the Hunter had slowed, property values had plateaued, and moving forward with their building plans would no longer be the best use of their money.

Demonstrating the power of buying well, the renovated house was still positively geared, and they have the subdivided lots ready to build on when the market picks up again.

The Next Few Deals: More Ups And Downs

Feeling more confident after the first Hunter Valley deal, Wilson quickly bought another house in the area and subdivided that lot as well.

This time, he had more information about the market situation, and he took his builder’s advice to sell the vacant lot after subdividing. The land sale offset much of the cost of the house, which now generates additional positive cashflow.

Getting out of the Hunter, Wilson then picked up two mining town properties in Archer and Casey. They paid off handsomely at the time, although the recent downturn in mining has undermined property values since then.

Wilson’s Peg In The Sand: Gaining An Income

Wilson realised that what he really wanted was a better lifestyle, and for that he needed an income. After asking Dymphna for advice, he decided his path forward was through management rights.

It took six months to find the right joint venture partner for the deal Wilson had in mind, and then another year of arguments between lawyers to get all of the necessary financing approved. At the end of it all though, Wilson closed on an excellent apartment building in Chelsea Park, and the management rights strategy left him with three income streams from one deal.

“I found a very experienced partner, and I learnt a lot. He has given me the confidence to go forward.”

First, Wilson agreed to personally manage the building, controlling the common areas and earning a salary for his work. Second, as a shareholder in the management company, he was entitled to a share of the profits from any leftover strata fees. Finally, his role as manager allowed him to earn commissions from sales of units within the building.

Together, the three sources of income add up to $80,000 a year. The management rights arrangement also gives Wilson the option to take back his free time and subcontract the building management in exchange for part of his salary.

America – The Land Of Opportunity

With an income stream making it easier to secure financing, Wilson decided it was time to start investing in the U.S. In 2011, he took advantage of the weak U.S. dollar, which was exchanging one to one with the Australian dollar. Since then, exchange rates have moved in his favour, adding 30% to all of his gains in U.S. currency.

Housing markets all over the United States were on the upswing at the time Wilson was buying. He found some very cheap deals on properties that appreciated quickly, giving him plenty of free equity while also providing passive income.

He tapped into his super fund for extra cash to make a series of eight purchases, keeping his focus on income generation.

In Atlanta, Georgia, he found a townhouse and another house for $35K and $60K. When a hedge fund also decided to invest in Atlanta and bought a lot of housing in the area, the property values skyrocketed to $80K and $110K.

Wilson met with similar success in other locations. In Dallas, Texas, he picked up a home in a gated community for $145K, and it’s now valued at $170K.

Next, in Pittsburgh, Pennsylvania, he took on a duplex requiring substantial rehab. The purchase price was $16K and the rehab cost another $90K, but the property’s estimated price after renovation is over $200K.

Finally, after seeing the housing market in Pittsburgh firsthand, Wilson went ahead and bought four properties. Two of these came so cheap that he turned around and resold them with rent-to-own agreements. The new buyers will pay them off at the higher market price—plus rent and interest—directly to Wilson over 30 years.

All told, Wilson’s streak of American investments will provide him with net rental income of roughly $76K per year in U.S. dollars. At today’s exchange rates, that’s about $100K Australian.

Through every deal, Wilson always kept his mind on his real ambitions. It was never the money itself that he was working for, but the lifestyle that the money would give him. Whenever he lost sight of his strategy and considered making the wrong investments, remembering his peg in the sand kept him on track.

Now Wilson has reached a turning point. After five years, he’s reached his goals and now has plenty of time and money to spend on the things that are really important. He’s not sure exactly what he’ll do yet, but he will certainly work hard and do it well. 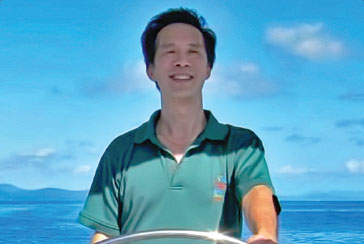 “Never give up! You could be so close to your goals and never know it.”