How a young woman used her gap year to help her father make $250,000… and pocket a quarter of a million herself!

Naomi Cooper joined The Property Games two months later than everyone else, filling in for a late scratching.

Slow off the blocks and with no real estate experience under her belt, Naomi quickly started to wonder if she was in over her head.

However fortune favours the bold, and her willingness to leave her cruisy life in Tasmania and live in the kitchen of a Queensland building site has paid dividends. Naomi delivered the most profitable deal in The Property Games series, chalking up nearly half a million dollars in profits to share with her father.
Not bad for a girl on her gap year.

Naomi distinctly remembers the day she got the call to enter The Property Games. She was in her gap year, living in Tasmania and pretty much “doing nothing”. One day she was lying in bed watching a movie when her dad phoned her up out-of-the-blue with a proposition.

“Do you want to move to Queensland, be mentored and make lots of money through property?”

She thought about it for a second.

From that day on, Naomi had Kevin and Dymphna on her back, pushing the reluctant teenager to rise to the challenge. Naomi had done the bare minimum to get selected, and she wasn’t intent on pushing herself too hard. She definitely wasn’t happy about giving up her tickets to the Splendour in the Grass festival to attend a property seminar!

Naomi quickly realised that The Property Games wasn’t going to be a walk in the park. Her first ILRE event gave her a sense of how much there was to know, and the immense body of knowledge that Dymphna and Kevin were bringing to the table. It was time to step up, step out of her comfort zone and start talking to people.

Throwing herself into The Games, she left Tasmania and moved to Queensland to be closer to the training and to her mentors. Kevin Doodney took her under his wing and hooked her up with contacts in the industry. He also helped her find direction and to hone her strategy.

Deal 1: One into Three Subdivision and Renovation

Through one of Kevin’s contacts, Naomi found a property with potential for renovation and subdivision. The street had a recent precedent, which made it easier for her to do an accurate feasibility study. The house itself was in an awful condition. As Kevin said to her, “you don’t have to take your shoes off, it’s already trashed.” It was nasty.

“Kevin told me to focus on the where I live and to go after a subdivision. He also put me in contact with Roy, a surveyor. I fed him cups of tea, and tried to squeeze deals out of him. Eventually he coughed one up.”

Naomi buddied up with her dad in a joint venture partnership. Together, they purchased the property for $550,000. The subdivision costs were high, but the market was doing well and they anticipated a strong final selling price. Naomi’s father was a builder, and they worked out it was cheaper to fly him back and forth from Tassie to do the demolition and renovations, than it was to subcontract out the work.

In the sale terms, Naomi requested access prior to settlement and required the vendor (who was going through a divorce) to guarantee settlement by December 2015. The vendor was unable to meet his end of the bargain, however, which meant Naomi could move in rent free until the new settlement date in April – a definite bonus for her pocket.

On Christmas Eve, she moved into the only liveable area in the property – the kitchen. With her father’s help they ripped out the carpet and the bathrooms, although this meant that Naomi had to do the unthinkable and live without a toilet or a shower for a while.

Naomi was a long way from her comfortable suburban bedroom in Tasmania. With feelings of physical and emotional isolation from family and friends, and having just broken up with her boyfriend, Naomi was doing it tough.

However, in the end, her hard work and persistence all paid off. Just 14 months after signing the contract, Naomi had a winning deal in her hands.

Purchased for $550,000, the renovation and subdivision costs came to $260,000. She sold two blocks of land for $285,000 each and kept the block with the renovated house, which was now valued at $480,000. All up, she walked away with an indicative profit of $242,000 for both her and her father. Not bad for a year that might have otherwise been spent watching movies in her bedroom! 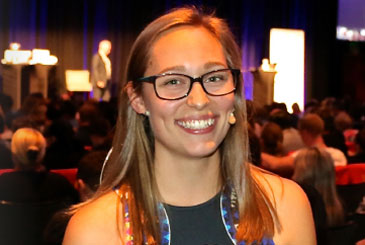 “Do happy dances. If you go through your journey and only celebrate at the end, you’re not going to have an awesome experience. Appreciate what you’ve done, the hard work you’ve put in and the growth you’ve achieved along the way.”