Paul and Shakira had just $200 in the bank and a bunch of debt.

Paul had to borrow money from his father to get into Dymphna Boholt’s Ultimate program.

Since then though they have never looked back, working their way through the education modules and receiving one-on-one mentoring through the Platinum Accelerator program.

It’s a success most 30-year olds could only dream of.

“It was the ugliest house on the street. They had even matched the curtains to the bedspread!”

Making the Most of the PPR.

In August 2013 Paul and Shakira purchased ‘the ugliest house on the street’ in Kilsyth, Victoria for $462,000. With no equity, zero savings and limited cash flow they got to work on cosmetic renovations, keeping the costs down wherever they could by using K-mart stagings for the internals and doing the landscaping themselves.

After two months and $25,000 down, the renovations were complete.

But then Paul and Shakira discovered their PPR was located in an area with subdivision potential. Although they had little knowledge of zoning and overlays, Paul and Shakira were armed with a strong belief that they were the creators of their own luck.

“We became so much more focused and disciplined with our time. I’d say, ‘would Dymphna approve of what you’re doing right now?’”

They set out on getting the subdivision through, which cost them $40,000, and then constructed an additional dwelling at the rear of their property for themselves for $350,000.

Although they made a conscious decision not to build their ‘dream home’, Paul and Shakira’s strategy was to focus on certain luxury features in order to maximise equity and position themselves for their next deal. They chose stone bench tops in the kitchen and high ceilings in the down stairs living areas.

Three years later, after spending a total of $877,000 on the property in total, Paul and Shakira have sold the front house for $621,000 and relocated to the rear property to avoid paying capital gains tax.

“Having a mentor keeps you accountable and motivated. There’s no way we could have done this without Mick.”

Another in the Neighbourhood

Fresh from their success with the PPR, Paul and Shakira purchased another Kilsyth property for $760,000 in November 2015. Already established, this property also comes with zoning favourable to high-density development.

They negotiated a long settlement (nearly two years!), and also negotiated early access to commence DA approvals for a 4-lot subdivision. The estimated profit from the sale of this property, targeted for June 2018, is $375,000, with a 20% return on cost.

“We have vision-board in our kitchen. Before that, we didn’t actually know what we wanted. But now we have a daily reminder.”

Paul and Shakira are the first to admit their surprise at being in such a strong financial position at such a young age. They put it down to the combined power of mentoring and education, “assisting us to make better decisions, while avoiding all the mistakes.”

They also believe in the power of ‘stacking’ strategies – e.g. combining a reno with a subdivision – in order to create the perfect deal. You’ve got to go out and make it happen.

They also stress the importance of accountability. Through having an ongoing mentor and regular connection with the ILRE community, they know there’s no room for excuses. Your community keeps you focused and moving forward. 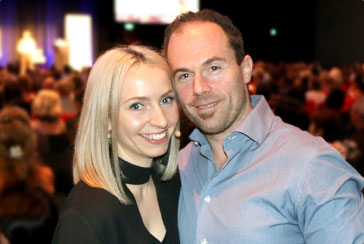 “It has been the craziest of journeys. We have evolved completely. Joining the Ultimate program was the best decision we ever made.”

Purchased our PPR in August 2013.
Renovated October – December 2013.
Realised we could Subdivide the PPR.
Subdivision & construction of new dwelling.