As Dymphna Boholt’s daughter, Samantha carried a heavy burden of expectation into The Property Games. At just 19, she was also the youngest competitor in the pack, and determined to find a way to step our from under her mother’s shadow.

She did have several things going for her though. She was far and away the most property-literate of the group, having worked part-time at a real estate agent and having attended her first property boot-camp at just 12 years of age! Having been instilled with financial discipline from a young age, she also began The Games in a better financial position than most, debt free and with $20,000 to her name.

Rather than lord these advantages over the other competitors, Samantha stepped into a leadership role, mentoring and pushing other members of the pack to do their best.

At the end of The Property Games, Samantha had well and truly lived up to expectations. In just 18 months, she had engineered three successful deals, secured a passive income stream of $17,000 a year and bought into a house of her own… just 500m from the beach!

Having done all of this before her 21st birthday, Samantha is a living lesson of what can be achieved with hard work, discipline and the right training in real estate.

Samantha’s first move when The Games began was to purchase a 21sqm unit in an apartment complex in Brisbane. It was in a great location, by the river and just 2km from the CBD. In a run-down state, she saw opportunity for a full-blown renovation and a quick sell for profit.

With a purchase price of $125,000 she did a no-money-down deal and negotiated a rent-to-own structure with the owner. She signed a lease at $280/week for the first six months, with access and permission to renovate prior to settlement.

In her enthusiasm, Samantha originally estimated that the renovations would take just six to eight weeks; however, life soon got in the way. She had to have a knee-reconstruction and the pressures associated with her Uni degree started to mount. As a result, the renovations started to drag out.

Determined to finish the job, Samantha roped in the help of her builder father and her handy boyfriend. She got them to do the gutting while she hobbled about on crutches doing the painting and final touch ups.

Her plans to sell the apartment also run into trouble, trying to sell over the Christmas period and with the bank valuation falling short of the market valuation. However, with effectively a brand new unit on the Brisbane River, positively geared to the tune of $3,000 a year, Samantha is more than happy to keep the property in her portfolio for the
time being.

“Samantha mothered the kids throughout the whole process of the first few months. She stepped into leadership, getting them up and running, and she did it with such beauty.” – Kevin Doodney

Feeling that she needed another deal to make her mark in The Games, Samantha found a seller in Logan, QLD, looking for a JV partner. The seller was half way through a subdivision of a 1,300 sqm block, but had ran out of funds and needed an extra $90,000 to finish the job. Samantha was looking at a $20,000 profit split, which would have been “not bad for a couple of months of paperwork.”

The seller pushed her into doing the paperwork quickly, but after being presented with a neat 20 page document, she got shy and backed off.

Chalk it up to experience.

“I’ve been dragged along to Property Boot Camps ever since I was 12 years old! I don’t regret it now!”

Moving on quickly, Samantha found a deal with a block of five units further north. Currently positively geared, she saw potential to manufacture growth by doing a strata title. Being mostly paperwork, the costs are modest. However the deal was still being worked through the council by the time The Games completed.

Samantha went into JV partnership with her brother, and they have an expected profit of $210,000 to split between them.

“It’s regional, so the council takes a little while to get things through. We’re looking at 12 to 18 months.”

Deal 4: PPR on the Sunshine Coast

As The Games deadline loomed, Samantha secured a ‘gem’ of a property just 7 days out from the finish line. The property is an extremely steep 670 sqm block on a busy main road, but only 500m from the beach. She plans to purchase with the aid of the $20,000 FHOG, build two storeys up (“with views to the hinterlands”), and turn the property into a six bed rooming house.

She plans to keep the top floor for herself, with master bedroom and kitchenette, and rent the downstairs areas. With an estimated construction cost of $300,000, and an end value of $650,000 – $700,000, the property should deliver a positive cash flow of $14,000 per year. Not a bad return on your principal place of residence!

All while finishing off her University degree and moving out of home for the first time, Samantha finished The Property Games strongly, with a performance property to her name, and two exiting ventures in train.

Her first steps have shown that Samantha will one day be a formidable property investor in her own right… perhaps even more legendary than her mother… one day. 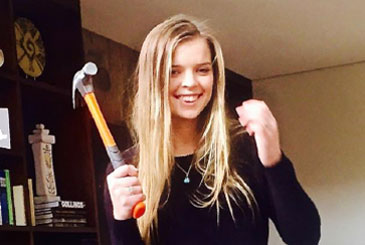 “Don’t be scared to get out there. Just got to take a chance, no-one else our age is doing that, so if you want to be different you’ve got to take the plunge.”