From Barefoot To Booming. How this ‘cruisy surfer’ built a $2.6m portfolio in just six years.

Not everyone manages to excel at school or college, but real estate is accommodating – there’s a place for everyone no matter what your education level is. This is how Carson and Tanya turned a development niche into massive profits.

Describing himself as ‘pretty cruisy’ and something of a ‘try hard surfer’, Carson thought he was doing well for himself. At just 18 years of age, working as a carpet cleaner in WA, he purchased his first home from a client. Shortly after, he discovered it had doubled in value and his confidence grew.

“I don’t know why, but the price went up. I felt like an awesome property guy.” – Carson

On the profit of the apartment sale, Carson and his brother threw on their backpacks and travelled. During this time Carson met Tarnz, and they volunteered for a couple of years until their funds dried up and they returned to Australia.

“I was trying to work out what I was doing, and my folks were buying investment properties in WA”.

A conversation with one of Perth’s Real Estate industry leaders left Carson inspired by the many lucrative opportunities, so much so he decided to try student life again, this time with the Real Estate Institute of WA (REIWA). But Carson had trouble applying himself and dropped out of the course. Back to the drawing board, he phoned his uncle and returned to the safety of berry picking at Mount Barker in WA.

They bought another unit, but ended up selling it for a loss, just as they were about to welcome their first child into the world. This set Carson and Tarnz up for yet another mission. They packed up and moved to the Gold Coast. Carson’s Dad had some cash to help him get a Carpet Cleaning and Pest Control business started, while Tarnz did hair and make up. With just $1000 in the bank and a credit card debt of $5,000, they started family life from an anxious back seat position of -$4,000.

Buckle up, here we go

Tarnz and Carson lived week to week until one day one of his clients suggested an Amway side hustle to which he politely responded he was more into property. This ended up being the catalyst for action he needed. Carson had seen ads for Dymphna Boholt’s conferences online. Carson cajoled his dad into paying for the conference and signed up. As a family, he, his dad and Tarnz attended their first Conference.

“We didn’t have a great starting position, I didn’t have two cents to rub together.” – Carson

In 2015 Carson and his dad joined forces and pulled together around $400,000 to get into their first deal.
Carson found a multiple title opportunity on the Gold Coast. After turning a single holding into two separate lots, building on both lots, and selling the original cottage back to the Real Estate Agency who had sold to them the property in the first place, Carson and his dad booked a total profit of $342,000. In hindsight, Carson said he should have just sold the lots without doing any of the development, but still, he pocketed $171,300 after going halves in the profits with his Dad.

“I asked a woman who had done the training ‘Is this for real or what?’ and she said ‘Look it’s changed my life’.” – Carson

With the confidence this deal gave them – maybe too much confidence – their second deal was a bit more of a precarious buy. The house had been trashed by some unsavoury characters, but it was a Dual Occupancy and Carson could see its potential. He carried out some minor repairs and cleaned up the damages, and sold it on for a profit of over $80,000.

He laughs as he remembers showing the place to Tarnz. “OK babe, when we come to this place. Look at it with vision. Don’t look at this as our forever home.”

Carson and Tarnz banked their share of $43,750 and their confidence really started to blossom.

Deal 3: Know your worth

From that point on, Carson and Tarnz were ready to stand on their own two feet, and do deals with people they weren’t related to. Despite fears around losing other people’s money Carson plucked up the courage and reached out to Dymphna Boholt’s community. He joined forces with a Sydney woman and engaged his Civil Engineering friend, and bought a Sub-Division deal on the Gold Coast.

Carson found he was great at spotting ugly ducklings – properties with a lot of warts but also with a lot of potential. His profit share of $36,160 is testament to that. By now he was really beginning to understand his own unique strengths and talents.

“I was stoked because it was such a passion. He was always on the internet looking at deals. Something came alive in him”. – Tarnz

His fourth deal was another Lot Subdivision. This project was an epic learning curve with wild water issues: flood mitigation and water mains repairs, but was still profitable and Carson was really coming into his own as an investor. Where deal number four had been a headache, deal number five was easy and quick money – joint-venture sub-division where underlying value lay in the land not the house. The house was removed and both blocks were sold. This is a golden opportunity people often miss.

With all of this experience, difficult enviro sites become something of a niche for Carson, and a profitable one at that. His Civil Engineering mate came on board as his business partner and they did Development Application Flip in Brisbane built on a 3 lot sub-division. Although it was a steep site with storm water issues, it still allowed them to bank roll another project from the profits.

Cleaning carpets and couches had taken a toll on Carson’s physical wellbeing. But now, Dymphna Boholt’s training and Carson’s dedicated work are starting to pay off, and he was in a financial position now where he could sell his Carpet Cleaning business.

With success under his belt, Carson started hunting for bigger, juicier deals. He found one site where he knew they could get 14 blocks on a Gold Coast subdivision and build site. The plan is to sell 10 and keep four in order to start building a portfolio to start creating cashflow. This deal is projected to deliver $1.2m in profits.

“It’s a genuine win for both parties” – Carson

These days Carson’s eldest son Seth is almost 12 years of age and a real chip off the old block. With the odd bribe of Maccas, he became his dad’s wingman in attending open homes all over the place. Carson briefed Seth on what to look for in potential properties and he started scouting.

“Jeeze, I think you’ve actually found one mate” Carson told Seth one day when he presented his dad with a site that ticked all of Carson’s qualifying boxes. Seth is part of the family business now, having really immersed himself in the process and will bank a sweet $5k on settlement.

Not bad for a kid.

Still dreaming big, Carson’s next deal was an 11-Lot sub-division. By the time Carson found it, the site had been on the market for 6 years. Carson had actually made an offer two years earlier but to no avail. This time he negotiated to do the operational works to clear the trees under a 15-month option and previous DA. Carson will peg it out and mark it and be able to presell it; while a private lender will fund it.

“My back is feeling better about not cleaning couches.” – Carson

With a family of five now, Carson is stoked that he is living life on his own terms – where he can spend time with his family, apply the skills he has and do what he loves. Setting his family up for success and freedom to roam has meant the world to Carson. He’s excited for the missions they have ahead of them.

Proof is in the portfolio

Just six years ago, Carson’s financial position was pretty dire. Yet he and his wife Tarnz have transformed -$4,000 into a current portfolio worth $2.6m, generating a projected $70K per annum of passive income.

Not bad for a cruisy surfer.

“It’s been brilliant and is going to give us a LOT of options. If Dymphna gives you an opportunity, I’d say go for it.” – Carson 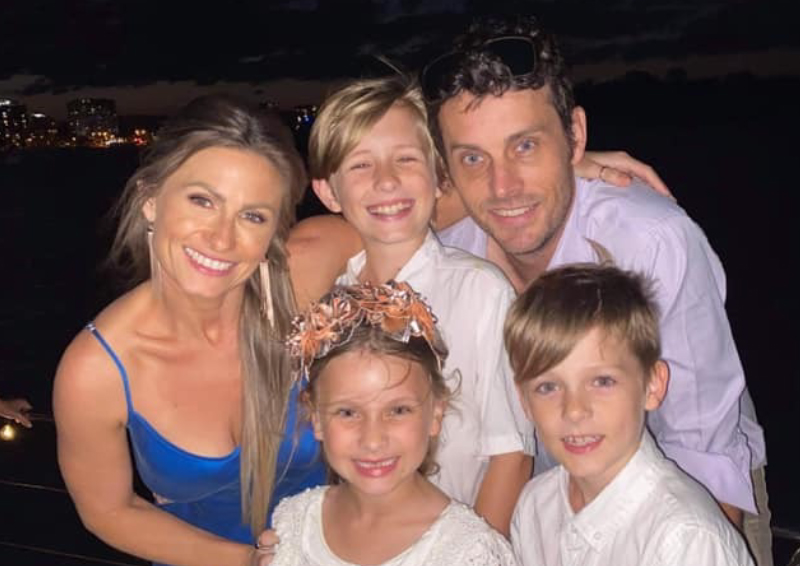 “It’s been brilliant and is going to give us a LOT of options. If Dymphna gives you an opportunity, I’d say go for it.” – Carson

Before I Love Real Estate

Now with I Love Real Estate