Jaye and James had made all the classic property mistakes. They had almost $2m in debt and were negatively geared to the tune of $67,000 a year – on a combined household income of just $100,000.

Then in 2015, Jaye had a series of seizures. She was hospitalised and it took more than two years to diagnose what the problem was. Her husband James, who had lost his first wife, wanted to take time off to look after her, but they had such a huge debt to service.

They just wanted to start over

Jaye had heard about Dymphna’s course, and signed up for the Quantum program before she had a chance to talk it over with her husband. James noted that there was a 30-day money back guarantee, and said that “if you can make the money back before the 30 days is up, we can keep the course.”

Starting with Dymphna’s Wealth-Check, they got a lot of help “undoing all the advice” they’d received until then. This Wealth-Check allowed them to save $30,000 a year (3 times the program cost!), straight from the get-go. The Eyre’s kept the course.

It all started with the Wealth-Check

The Wealth-Check, from trained property professionals, undid a lot of the unhelpful advice they had received from ‘experts’ in the past. With specialist property tax advice, and rolling money from GESB to REST, which allowed her to pay insurance from her super, Jaye freed up over $27,000.

They also told her to look at the depreciation schedule for one of her investment properties – a property other experts had told her not to bother with – and that saved her a further $3,544.

With their immediate cash flow concerns contained for now, Jaye started giving their portfolio a total work over.

“The wealth check-up is so worthwhile. It just puts everything into place, and gives you a foundation to build on.”

They started renting a company house as their home, and sold their original PPR. Taking advice to give the property a simple landscaping facelift and a few minor touch ups to make it more attractive to the family market, they sold the property for $775,000, paid off $480,000 worth of debt, and were left with $275,000 cash to roll into a smarter investment.

Jaye used that money to purchase a property in Brisbane to demolish and subdivide. She then had the property revalued and was able to get a loan to build two four bedroom, two bathroom double-story houses.

Jaye planned to keep one house as a positively-geared rental and sell the other house. She instead decided to sell both Brisbane houses to pay off more debt. But the plan was to keep one. Everything changed again in Feb 2017 when we were moved from QLD to Perth.

Under the guidance of one of Dymphna’s Platinum Mentors, Jaye began thinking big. She owned a block of land in south-east Perth suitable for a triplex development.

However, instead of building the standard three units, Jaye envisioned a total of four rentals. Her plan is to renovate the existing house, build another three bedroom, two bathroom house and give each house their own two-bedroom one-bathroom granny flat.

Jaye plans to keep all four rentals (though possibly selling one to her SMSF), with potential positive cashflow of up to $32,000 pa.

The Ugly Duckling in the Goldfields

Next, Jaye set her sights on a commercial property in the Goldfields. There were four units (built by four friends), which had already been on the market for two years. There was no formal strata in place; just a “country agreement” to do whatever needed doing, and there was no tenancy agreement with the tenants. This scared a lot of buyers off, but to Jaye it was an ugly duckling –
no renovations were needed and the rental returns were high.

Following Dymphna’s methodology, Jaye found lawyers to assess the agreements in place, formalise and update the strata, organise insurance, set up a management agreement and install a three year lease with new tenants (with a monthly rent of $2,100). In the end, Jaye’s ugly duckling delivered her a golden egg of a property. It cost her a total of $195,000 and returns $23,000 pa in positive cash flow.

Jaye then purchased a four bedroom, four bathroom residential property in the Logan area, QLD near to Griffith University. This property had been on the market for eighteen months, and had been badly advertised.

One of the rooms was being used as a store-room. The previous owner had hurt her back and was unable to clear out the junk. Negotiating a good deal, Jaye purchased the property for $160,000, hired a truck and removed the furniture herself. She spent $3,000 on new furniture and appliances and each room now rents for $180/week, (and the carport for an additional $40/wk!). Even accounting for University holidays, the property returns $19,000 pa positive cash flow.

Jaye has found that taking control of their finances has turned their whole life around. It has brought Jaye and James closer together, and she loves having income streams that she can fit into pockets of her life. She is proud of the role model that she can offer her kids – as a woman who is independent, creative and makes a contribution to the family finances.

Jaye’s journey has also highlighted the importance of the basics. You just don’t know what you’re doing wrong until you sit down with someone who really knows what they are doing.

There’s so much money just sitting under your nose. 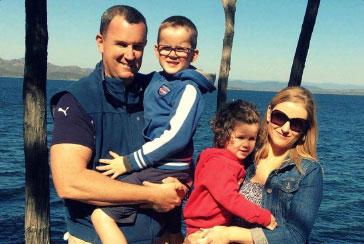 “Forget what broke and unhappy people tell you. Just start.”