DAMNING ADMISSION: “As an accountant, I was telling everyone that negative gearing was the way to go… I WAS SO WRONG!”

Brian wanted to be a wildly wealthy woman.

Well, not quite. In 2004 Brian was dragged along to a seminar at the Brisbane Convention Seminar. Little did he know it was to an event called ‘Wildly Wealthy Women’, and he ended up being one of only two blokes in the room!

Because Brian had been doing everything wrong. On the advice of several “experts”, Brian had every property he owned negatively geared. He also worked as a tax accountant and would tell all of his clients that negative gearing was the way to go.

For a long time, negative gearing was the received wisdom. It’s just what everyone did. It was what every accountant recommended. However it lead Brian up the garden path. Eventually the banks refused to lend him anymore money, and his properties were costing him $184,720 a year!

Meeting Dymphna, and joining the Ultimate and Platinum programs has been a revolution. Brian has totally reworked his portfolio, and rather than losing money, his property portfolio now provides him with passive income of $65,000 a year…

With his own financial future secure, Brian has now begun helping his children build their own property portfolios, with his youngest son Luke looking to join Dad as a full time investor.

On the basis of advice he’d received from other real estate “experts”, Brian had sought out negatively geared properties, drawing down equity once a year to pay the bills. Eventually Brian found himself with a portfolio that was costing him $184,720 a year, and totally cut off from further credit.

It was time for a total portfolio makeover.

Brian started selling down non-performing properties, and putting the rest to work, manufacturing growth through renovations, splitters and DA uplift.

Deal 1: The dream that wasn’t

Prior to joining Platinum, Brian had a property in Macgregor that he was renting out as student accommodation. It wasn’t a great performer and had a pool, which was expensive to maintain.

However the council rezoned the area where the property was located from Res A to three stories and then to five stories. Brian got a DA approval for a five-storey unit complex, putting a lot of time and energy into the design and architecture.

However, when they did the numbers with Dymphna, they figured it would take them 18 months to complete, and tie up all of their finances and leave them unable to do anything else.

So Brian put his ego aside, and put the property on the market as is, with DA approval, and it looks set to gain considerable DA uplift.

For a while Brian was working in New Zealand as the Waikato University librarian in Hamilton. While he was there he purchased a property, and has now decided to subdivide, turning 2 lots into 4.

This deal has been delayed by a tenant who has refused access to contractors – which tenants have a legal right to in NZ. The tenant has since decided to move on, and Brian is hoping to move ahead with this one in the near future.

“I’d been working as a tax accountant for 16, 17 years, and when clients came to me asking ‘How can I save tax?’ I would suggest negative gearing. It’s just what everyone was doing.”

While he was in NZ Brian bought another property in Hamilton, near the regional hospital and another private hospital, and a short walk to town. The plan now is to subdivide the property in two, keep the lot with the house, and sell the remaining land.

Brian found a property in Sailsbury facing a non-existent road. The council had plans to put a road in, but the plans were scrapped, and now there was a stalemate between the council and the previous owner. There was an opportunity here for Brian to subdivide the land, and get the road put in for the house himself.

He paid $330,000 for the original house and land. After the subdivision he sold the vacant land left over for $350,000 and kept the house, scoring a house for himself practically debt-free.

On his next deal, Brian set out to do a minor renovation on the bathroom, and give it a quick lick of paint. However, there was a leak in the shower and once Brian’s eldest son (a builder) got involved it quickly escalated into a major reno.

In the end they totally redid the bathroom, ripped out the floor, put in a new kitchen and even added a new deck.

However, the renovations paid off and they were able to increase the rent. The property is now cash-flow positive and they have decided to keep it.

Dymphna’s advice to Brian was to then diversify his portfolio and get into commercial property. Brian decided to use a SMSF to make his first commercial.

His search started looking for tenanted properties, but when that turned up nothing, he expanded his search to include untenanted. It was there he found one that, when you read the ad closely, was listed as untenanted but only because there was doctor who had been there 17 years and his lease was up for renewal. The doctor had every intention of renewing the lease and so Brian’s eye for detail really paid off.

There is also a major commercial development next door, so if the doctor doesn’t renew his lease they’ll just mirror that development. Brian says he kind of hopes the doctor leaves, but says he’s happy either way.

And with $29,000 passive income, guaranteed for five years, why wouldn’t you be happy?

His next property was another commercial property in Taree, tenanted out to the NSW government. They spent over $1.5m doing the fit out (due to tight security requirements) and won’t be going anywhere any time soon.

With a tenant in place and guaranteed rent, this property was delivering $40,000 passive income from day one.

Helping out the kids

With all the expertise that Brian’s gained he’s started turning his focus to giving his kids the best start in life he can. Under his guidance, all three of his children managed to get into the first property by their 21st birthday.

The youngest son Luke also has two properties to his name – a sturdy and reliable rental in Inala, and a Queenslander built on 852m2, with a lot of development potential.

For his middle son Jonathan, Brian applied what he had learnt about staging and presenting a property, and helped him sell his house for $60,000 above expectations, setting a new bar in the neighbourhood.

He then helped them find a new place – a house on a large block of land for $630,000 – and they already have a DA in place to subdivide the land. Land in the area currently sells for around $450,000, so there’s potentially $900,000 worth of value plus a roof over their heads for a few years.

For his daughter in law Trinity, he’s currently mentoring her through a DA/BA process on Fibro palace. The plan is to create 4 rentals, by splitting the existing dwelling and building an additional two 3-bedders.

His eldest son James has two properties in his name. The first was a termite infested two-bedder that he picked up for $119,000. James is a builder, so he was able to live in it with a mate and completely do it over and add another bedroom. Now a rental, it’s currently worth around $430,000. On his second property, he put in a granny flat downstairs where he currently lives, and rents out the 3 rooms upstairs, room-by-room.

A life of learning

Brian believes education has been the foundation of his success, and has attended over 40 of Dymphna’s events. He says, “I still attend as many events as I can. Each time I will learn something new that I can apply to our situation. I may have heard it before but there is always something that will suddenly click.”

With a number of successful properties in the kids’ names already, and Dad at the helm, the family legacy looks secure. 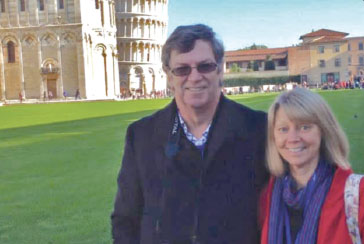 “I am grateful that Dymphna was able to see a potential in us – at a time when we didn’t believe in ourselves. It’s been an amazing journey.”