With $80,000 a year negative cash flow bleeding them dry Melissa and Phil knew something had to change.

Melissa and Phil always had businesses. They liked to keep busy, but working 7 days a week to keep the businesses going was getting too much and they began to look for other solutions. They already had several industrial properties and a couple of poorly performing houses in regional Victoria.

The losses on the properties had become hidden in their business expenses.

It wasn’t until they saw Dymphna live that they took a closer look at their numbers and realised that they were being bled dry by these properties. In addition to negative gearing they had also made many of the common mistakes investors make: Trust issues, properties in their own name, incorrectly set-up SMSF…

They realised that the best place to start was with what they had.

The two under-performing investment properties they owned had been left to rack and ruin, with one of them untenanted and the other with under market rent.

They took Dymphna’s advice about managing the managers and cut better deals, putting up the rent on one and, after a quick reno, getting the other one tenanted. Both properties came with stricter contracts about how the properties were to be managed. Both now are positive cash flow and being properly maintained.

Deal 3: Modular Import in the NT

Another property they owned in Northern Territory had a large back yard which was under-utilised. Melissa and Phil began to explore modular options to build a self contained dwelling in the rear to create extra rent.

This modular build created $14k passive income on a property they already owned!

The two side by side industrial blocks which were doing nothing but costing them money became the next topic of discussion. After some investigation they found that flexible storage sheds were needed in the area and once built and rented out, this one move transformed an empty block that was costing them -$46K a year into a sought after industrial property making them $40k a year.

While they were developing a plan for the other block next door they found a pub for sale in country Victoria. Melissa had been watching this one for a while and knew that at the right price it would be a great deal with plenty of upside.

They got the pub in the end for $100k less than the reserve and it turned out to be cash flow positive from day one. The property came with a tenant (the publican) and in the renegotiation of the lease they took control of the backyard, which was unused.

Eventually Melissa and Phil will build units and a drive through bottle shop in the back yard, the intention being that someone else will run the business. The pub also comes with 11 guest rooms which they may turn into a separate business at some point.

They decided that they had a knack for this kind of deal so they landed themselves a guesthouse in a small country town.

The guest house was ugly and in desperate need of a renovation. By this stage Melissa and Phil had earned a bit of a break so they arranged for all the works to be done while they were on safari in Africa. They returned to launch their newly refurbished guest house and complete the last details to get the bar open so they could serve drinks.

“You can either sit out and complain or you can get up and get going.”

In addition, the guest house came with an attached laundromat. They’ve added a few extra machines and opened it 24/7. Now it makes around $160 a day profit and that’s not even counting the fact customers now drop their washing off and head into the guesthouse bar for a coffee or a wine while they wait. Previously customers had to go across the road to the petrol station for a bad coffee, needless to say they are loving their laundromat weekly ritual now and Melissa and Phil have substantially added to their cash flow.

The most recent deal was another deal that Melissa had been watching for a while. A group of 7 shops in deer park which were very dirty and run down. Due to the high price asked for the shopping centre and the subsequent lack of interest, Melissa was able to negotiate harder by making a lower offer and a 5 month settlement as part of the conditions.

Melissa had noticed that there were several people at the auction who wanted single shops but no-one who wanted the whole thing. They set about cleaning and repainting the shops, re-tiling some areas and generally making the place look like a good place to run a small business from.

Within 10 weeks they had completed their works and put all the shops back on the market to be sold at auction. Sadly no-one bid at that auction, however, thanks to some good planning and a great agent, all 7 shops were sold within 2 days to small business owner occupiers.

This quick turnaround earned Melissa and Phil $415,000 in profit, but the real win was that they kept the title on the carparks and also the air rights to the maximum building height.
Using these air rights, they are installing four panel signage and solar panels. The signs will be leased to advertisers on five-year contracts at $15,000 pa per panel. The solar panels should return $5,000 pa, so the air rights will generate an additional $65,000 pa.And it doesn’t end there as they are also seeking a development approval to build another three storeys above the shops.

The one that’s in the pipeline

Using the unused piece of industrial land next to their storage sheds, Melissa and Phil have developed a new concept in industrial buildings, getting approval to build several factories with houses on top. They did some research and got over a thousand expressions of interest from small business owners who loved the idea of being able to run their business from home… But need a warehouse.

It’s a new concept that people have never heard of before, so they are planning to build one to use as a display home/factory that people can actually see, feel and imagine themselves in.

It’s been a massive few years for Melissa and Phil but they are loving the journey, the creativity and especially the free time they have created for themselves in the process.

“Our aim was to be $200k passive income, but we’ve ended up doubling that.” 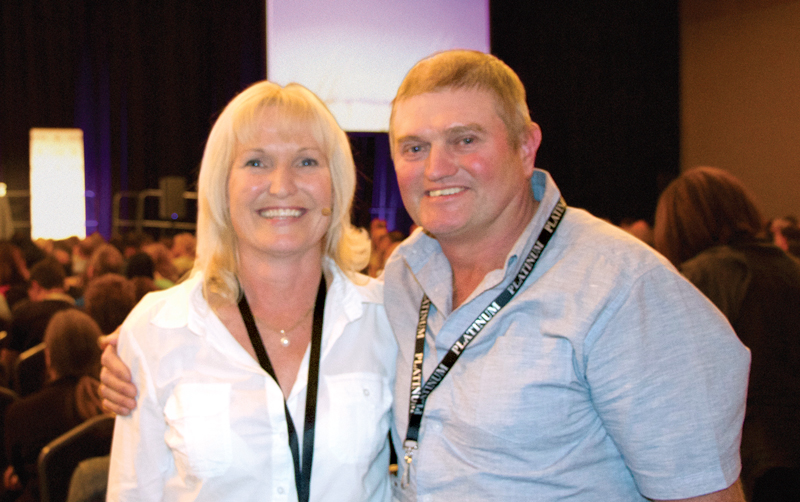 “We made many of the common mistakes investors make: Trust issues, properties in our own name, incorrectly set-up SMSF…”