Andrew’s business went bust. Now he has found the formula for property success and is a mentor for young investors.

Andrew is a sparky by trade. He’s also an entrepreneur with a taste for deals.

Back in the late ‘90s he got ahead of a trend for LED billboards that was already raging across Europe.

He was the man who brought LED advertising to Australia, and for several years it was a gold mine.

However, as he tried to grow his business he found himself in a legal dispute with one of his clients over a broken contract. Once the lawyers got involved things really went down hill fast, as the process burned through more and more cash.

In the end, Andrew became insolvent and he lost his business.

Andrew then struggled with depression for several years. He lacked direction. Having moved to Queensland to get back into the sparky game, he met people who were making a killing with property development.

“I call it my wallowing in the mud period. I lost trust in people, and lost my soul, my spirit and my enthusiasm for life.”

He decided he wanted in on the action, but he bought in late (Stage 5) on a residential development. Not long after the market tanked 20% and Andrew lost $42,000.

Realising that property investing is a minefield for the uneducated, Andrew set about getting himself skilled up. He attended numerous seminars, including several with people who went bankrupt during the education process.

Eventually he found Dymphna Boholt. He attended a one-day seminar and “learnt more in one day than I had in years.” He joined the Ultimate program on the spot, and it has been “the best investment of my life.”

Andrew now “buys property the right way” and has a number of deals going here in Australia and in the U.S. As well as improving his own financial position, with almost $700,000 in equity (excluding the PPR) and $60,000 pa in passive income, he is now helping young investors to learn the ropes.

Through Dymphna’s program Andrew has become a complete investor. He has a better trust structure to carry his properties, he works to a business plan, and he has started meditating and working on his mindset.

“I learnt more in that day than I had in the last few years. There was economics, trends, asset protection, tax minimization and more. I was convinced that this woman was the real deal.”

Andrew’s first property was purchased for $315,000 and was negatively-geared to the tune of $8,000 pa. Andrew has managed to turn this around by renting it out room-by-room in a House In Multiple Occupancy (HMO) structure, and he has also attached a granny flat. Currently valued at $535,000, Andrew’s equity in the property has sky-rocketed to $295,000 and he receives a net $25,000 per year.

After the GFC hit America and the housing market collapsed, Andrew ‘just knew’ he needed to be there. People in America were devastated, but Andrew knew it was an opportunity. Around this time Andrew was appointed President of Sutherland Shire Councils Sister City program and was required to travel back and forth between Australia and the US. Dymphna’s education on investing in the USA had Andrew well placed to grab some bargains.

“I was in America when the GFC hit. People were devastated, but all I could think was how many opportunities there’d be.”

The first of his American deals was a three bedroom deceased estate on two acres selling for US$45,000, which he purchased in May 2013. He had the strong Australian dollar ($1.09) working on his side, but the real bonus was a two-storey duplex that the vendor had no idea was on the same title. After renovations, Andrew was able to create $6,000 pa in positive cash flow from both houses and the property is now valued at US$130,000.

On the High Side

Next in line was a three bedroom house situated on the high side of the street with views across the city of Pittsburgh. Andrew purchased it in April 2013 for US$31,000 and currently rents it out for US$790 per month.

Now approved for American finance, Andrew purchased a three bedroom terrace for US$54,000 in February this year. After renovating, Andrew now rents it out for US$650 per month, and has plans to convert the carport into a lockable garage, which he will rent for US$50 per month.

Located within ten minutes of the city, and situated directly across the road from the Pepsi HQ and what is soon to be the second biggest movie studio outside of Hollywood, this one really gets his ‘balls clanging like milk bottles’… it has very good prospects indeed.

A Knight in Shining Armour

Around this time Andrew started mentoring investors in Australia through the ILRE community. However, a young couple he was mentoring had gotten into trouble.

Luke and Steph had purchased a property in Penrith NSW for $570,000, with the original intention of renovating it for equity uplift and cashflow. Unfortunately their builder, who had given them the cheapest quote, hadn’t shown up on site for six months and all development works had ceased.

The project was heading off the rails.

Andrew took them to lunch and convinced Steph and Luke to cancel their contract, and allow Andrew to step in. At this stage in his career, Andrew could afford some time out from his businesses, and he gathered up his team of tradesmen and threw himself into a full structural renovation.

It took them seven weeks to complete the works and attach a granny flat. The renovation costs came to $54,000 (Andrew saved them $20,000 by donating his time and picked up the over-budget costs of $6,000) and the revaluation came in at $770,000. With rents as high as $1,300 per week, the team are ecstatic with the result, and Andrew really helped Luke and Steph dodge a bullet.

Andrew stresses the importance of working on your mindset and making sure your life is in balance. You can’t put too much emphasis on the material things, and you’ve got to enjoy life.

Andrew’s experience with Luke and Steph has also shown him how satisfying it is to give back to the community and help others. Andrew feels very fulfilled in his new role as mentor and angel investor. 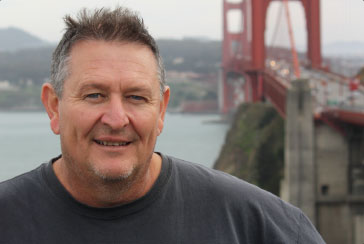 “I just wanted to get them out of trouble, but when we all made money on the deal, we all cried.”