Accountant finds a low-risk way to build $1M of equity in just 18 months… with $2M more already on the way!

When David’s work started drying up, he and wife Zoe left Perth to try their luck in Canberra. They wanted a way to take charge of their financial future, but Zoe, a trained accountant, didn’t want to take any risks. It seemed intractable, but a full-day property seminar with Dymphna Boholt gave them the answers they needed.

David and Zoe had made a number of poor investment choices, piling money into ventures in apple orchards, wine and even coffee plantations. However as they listened to Ian Ugarte explain the power of Dymphna’s methodology, they realised that property was for them.

Signing up to Dymphna’s Quantum program, they went to ‘Car University’, listening to Dymphna’s audio lectures in the car on the way to work and pouring themselves into the course materials. On Dymphna’s advice, they also studied with Billionaire Developer Bob Andersen and Options Expert Mark Rolton.

Sorting out their existing investments, David and Zoe became the money partners in a development joint venture. Watching over the shoulder of their knowledge partner, they saw that property development could give them the freedom and security they needed.

In less than 18 months, they have increased their equity position by over $1M, with plans in place to deliver a further $2.8M over the coming two years. Their portfolio is also paying out $32K passive income a year.

They are using their newly found financial freedom to invest in their grandchildren and children across the world. They support a number of development initiatives, including eight sponsor children in Africa.

For Zoe and David, property development was the key to independence. They were looking for a career that gave them freedom, and the freedom to move back home to Perth.

Focusing on education made everything possible. Investing in their own skills, and spending time with some of the most successful investors in the game, they learned to invest with a self-managed super fund, to use the most effective asset protection structures, and to make business decisions based on sound facts and reasoning rather than emotional appeal. Working with an experienced developer on their first new project helped them break into development on their own.

With a combination of Dymphna’s proven techniques and some hands-on development training, Zoe and David went back to their existing properties and turned them from dead weight into profitable investments.

The first deal they launched into after attending Dymphna’s boot-camp was a big one – and a profitable one.

David and Zoe became the money partner in a joint venture with someone they met through the I Love Real Estate community. The knowledge partner agreed to mentor them along the way, with fortnightly hook-ups keeping them up to speed.

Drawing down the equity on their homes in Perth and Canberra, they put $750K into a high-end subdivision in Kenmore on the Brisbane River. In exchange for funding this deal, Zoe and David were guaranteed 28% p.a. fixed interest, paid out 18 months later for a total return of $319K, or 42%.

They also picked up two blocks of the new subdivision for themselves, with a land purchase price 2.5% under the initial bank valuation. The bank’s initial valuations came in around $810K in July 2014. Before Zoe and David paid a cent for it, a Colliers valuation in November boosted the price to $1.2M, allowing them to flip the property for an easy gain of almost $400K in four months.

Meanwhile, they were learning a lot from their knowledge partner – getting hands on experience with routing powerlines, traffic control, street naming and all of the other details of development.

With this valuable new knowledge and a careful analysis of the local market, David and Zoe were ready to do their own build on the second lot they purchased. The project is still underway with a total cost of $1.7M and an expected sell price of $2.4M, for a net gain of over $600,000.

Deal 2: You can sell the trees, too

Having nearly tripled their equity, David and Zoe now set out to build passive income to fund their retirement. They took Dymphna’s advice and looked at their old PPR in Perth for subdivision potential.

Thirty years ago, David had planted some eucalyptus trees around their house in Perth. He didn’t realise at the time that the trees would grow to over 50 metres, and take over the backyard. He was concerned that removing the trees would be expensive, but a little creative thinking led to a perfect solution: he hired a company with a portable mill to convert the trees to useful timber onsite and pocketed the profits.

With the trees out of the way, the backyard was clear for a new build. They have an application with council now, and when it’s approved, they will set up a new trust and sell the back lot to the trust to minimize their tax liability. This method of Dymphna’s will enable the whole deal to work out in their favour.

Once the build on the back lot is done, Zoe and David expect to rent it for a passive income of $11,950 p.a. after costs, plus a substantial equity gain from the subdivision.

The backyard build in Perth showed them the money-making power of subdivision. They didn’t think the same thing would be permitted at their current residence in Canberra, but one day, Zoe noticed a backyard dwelling on their street. Instead of privately looking into the property she saw, she called the council directly for permission to subdivide, but the answer was a quick and definite no.

However, dual-occ’s are an option in Canberra. So they set out to increase the earning power of that investment by spending $185K on a secondary dwelling that they expect will provide another $9,000 per annum in passive income.

Most recently, Zoe and David have contracted options on three house and land packages in the first stage of development in Burpengary. With six months left to close, they are expecting plenty of appreciation in value that will leave them with considerable equity.

They are keeping an eye on the local market and still have an opportunity to back out of the deal before it closes. But if the value of the properties holds steady or rises within the next six months, they will have three houses for a total cost of $387K, generating an estimated $14K in annual passive income with plenty of room for growth.

Zoe and David have only been investing for 18 months, but in that time, they’ve increased their equity by over $1M, with another $2.8M on the way after their current projects wrap up, and $32,000 in positive cashflow.

They have a long-term plan in place to accelerate their growth through more building and development. Their way forward is guided by the strategies they’ve learnt from Dymphna, their continuing passion for education and the promise of greater rewards in the future—not for themselves, but for their children and for the rest of the world.

David and Zoe are particularly passionate about contributing to development projects around the world. They currently sponsor eight children through Compassion and the Irene Gleeson Foundation, and plan to take on more children in the near future.

But, first things first. They have a lot of projects lined up with the grandkids, and they are grateful to be able to spend so much quality time with their family. 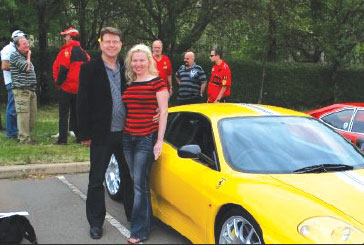 “It doesn’t matter where you are. If you start and you head down the road, you can do it”

Increased their equity by over $1M